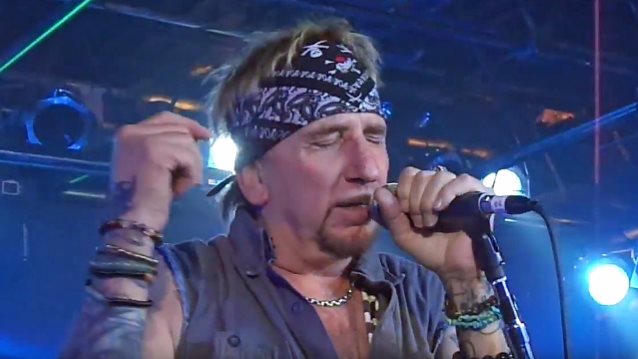 Ex-GREAT WHITE Singer JACK RUSSELL On His Upcoming Book: 'There Might Be A Couple Of Lawsuits Out Of It'

Former GREAT WHITE and current JACK RUSSELL'S GREAT WHITE singer Jack Russell was interviewed by rock journalist Mitch Lafon for a recent edition of the "One On One With Mitch Lafon" podcast (Facebook page). You can now listen to the chat using the Spreaker widget below. A few excerpts follow (transcribed by BLABBERMOUTH.NET).

On when fans can expect to see the release of his new album, "The Gauntlet":

Jack: "We haven't actually set a date yet. It's gonna be soon. The record's almost finished. We've taken our time [recording] it, and we're making sure we spend the same amount of time and effort in the mixing process. Like I said, we've just been taking our time; I just wanna have the best album we can out out. So hopefully before the end of the year. If not by October, [it will] probably [be out] in February [of 2017]."

On whether "The Gauntlet" is a band effort or more of a "solo" album:

Jack: "It's a band album, absolutely. Me and my guitarist have done most of the writing. It's definitely a band record. I wanted it have that sound. I didn't want it to be a mixed bag of tunes. I wanted it to have a cohesiveness."

On whether "The Gauntlet" is a return to the classic GREAT WHITE sound of the '80s or if it features a more modern approach:

Jack: "You know, I think it's a little bit of both, really. To me, the stuff sounds heavier in some regards and more whimsical. It's a really powerful record. I mean, I've just dumped every emotion I have into it, and I went pretty deep on a lot of stuff. There's some dark stuff on there, but there's some dark realities. But it's also a fun record too; it's not like it's all, 'Here's a big ball of negativity.' I don't wanna go down that route. But it's just an honest record, and I try to do that; I try to keep my records honest."

Jack: "I'm actually great. I've been running around. Every year I get better. My bones are healing up; I haven't had a problem with that. I've been running around on stage. I didn't realize I could run until the other day. We had a big, long 'ego ramp' at one of the shows we did, so I said, 'Okay, let's give this a shot.' And I was, like, 'All right. It worked.' [Laughs]. I didn't fall after all. So it was cool."

On why it's important for him to make new music and release "The Gauntlet" at a time when record sales are a fraction of what they used to be:

Jack: "Well, I mean, there's always new music in me. If you don't release it, the thing is just gonna fester in there. I mean, for me, being a musician is about being creative and making new music and continuing to strive for something more. It's, like, you could be an artist and you just have a gallery with a bunch of paintings in them, but one of these days, those paintings will either be all sold or people are gonna get tired of coming in and looking at 'em. I wanna keep releasing songs and music, because that's what I do. You never know what's gonna happen in this business, the way the record sales are these days, or aren't these days. But, you know, there's always a shot; you never know. And the thing is, if you don't take the shot, you'll never hit the target. So I never discount anything; I always think anything is possible. And, for me, the shows we're doing… We're doing good-sized shows; I mean, it's not just all bars. We do a lot of bigger shows, and when we do, we tear 'em up. This band is smoking. I've never played with more gifted musicians and just full of energy and life and fun. And there's no baggage and there's no secrets and hatreds and all this other stuff. It's great to not be in that situation, where there's a lot of negativity from years of stuff not being said."

On how he feels about his former bandmates Mark Kendall, Michael Lardie and Audie Desbrow three years after they reached an agreement allowing Jack to perform under the name JACK RUSSELL'S GREAT WHITE while the other guys continue as GREAT WHITE:

Jack: "You know what? I don't really think about 'em, 'cause I'm too busy working on my own stuff. But from what I understand, they're not letting it go. I keep hearing stuff from people. And I was, like, 'Don't tell me that stuff. I really don't care.' There's always something being said on the Internet. It's, like, I wish everybody would just do what we decided to do in court: let's split the name and everybody go out and have fun and make our own music and not sit there and just dwell on what happened. It's, like, you don't think you're happy, let's make a change. And if you are, just go play your music and have fun, and let me play mine and have fun… or ours and have fun. It doesn't matter. I just wanna keep playing and singing as long as I can. This is why God put me here, and I enjoy what I do. I think I'm pretty good at it. My voice is still in great shape, and my body's getting in better shape. So it's been a lot easier to do my job. I'm sober and not putting anything bad in my body, so consequently, it's treating me well. And everything's golden on my side of the bridge. I just to be positive and [focus on] the good stuff."

On his upcoming book:

Jack: "I'm just dumping everything in this book. And there might be a couple of lawsuits out of it, I would imagine. I'm gonna have to have my lawyers check it out before I release it. But, I mean, I don't really think that's gonna happen. 'Cause the book is about myself and what I've [gone through] and not so much about other people. But there are gonna be spots where somebody might raise an eyebrow and go, 'Hmmm….' It's gonna make some people upset. But it'll make more people laugh. If you're the butt of the joke, that's just the way it goes. [Laughs]"