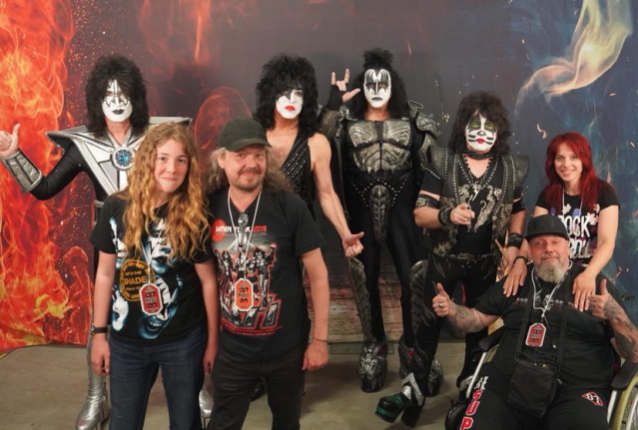 Former IRON MAIDEN singer Paul Di'Anno met the members of KISS for the first time in 42 years this past Saturday night (July 9) when the legendary rockers performed in Zagreb, Croatia as part of their "End Of The Road" farewell tour.

Di'Anno, who has been receiving physiotherapy and lymphatic drainage treatments in Croatia in preparation for his long-awaited knee surgery, supported KISS with MAIDEN on the former band's 1980 "Unmasked" European tour. On that trek, IRON MAIDEN played 27 concerts and for the first time visited countries such as Italy, Germany, France, Switzerland, Norway, Sweden, Denmark and the Netherlands. This run of shows undoubtedly opened the European doors wide for MAIDEN and helped Steve Harris and company become one of the biggest metal bands of all time.

At the time, Di'Anno told U.K. journalist Geoff Barton that he and his bandmates were "having an amazing time" supporting KISS. "We came over expecting nothing, but it's been so good," he said. "Touring with KISS is one of the best moves we've made. They've been so great to us, I'm knocked out."

MAIDEN guitarist Dave Murray agreed, saying: "KISS have been terrific. On our first gig with them we had trouble with our equipment; it was delayed at some border or other. It eventually arrived about an hour before we were due to go on, so that was okay. But all during the day [KISS bassist/vocalist] Gene Simmons had been saying to us, 'Don't worry, boys — if your gear doesn't turn up, we'll make sure you don't have to cancel.' Gene was prepared to lend us some of KISS's guitars and drums; he even sent someone out to see if he could hire a backline for us. It was a nice gesture."

Added Di'Anno: "KISS could've ignored us but they've been really helpful, really encouraging. We often notice the band members in the wings, watching our show. They like to see [MAIDEN's mascot] Eddie warming up the crowd; they love that. [KISS guitarist] Ace Frehley got so carried away, I even saw him climbing up the lighting rig to get a better view — platform boots and all."

A photo of Di'Anno with all four members of the current KISS lineup, as well as Chris Dale (who played bass on current MAIDEN singer Bruce Dickinson's 1996 album, "Skunkworks") and Chris's son Archie, can be seen below.

Last month, Stjepan Juras, a MAIDEN fan and author of many MAIDEN-related books, who is taking care of Paul while he has been in Croatia, revealed on Facebook that the 64-year-old singer will undergo three operations over two days in July. The procedures will be followed by a period of hospital recovery, intensive care and rehabilitation, including re-learning of walking. If all goes well, Paul should be able to walk fully by the end of 2022. However, if the set of treatments fails, then a leg amputation will be the only option.

In May, Di'Anno came face to face with MAIDEN bassist Steve Harris for the first time in three decades before the band's concert in Croatia.

As previously reported, Paul recently teamed up with several Croatian musicians to form a new project called WARHORSE. WARHORSE recently entered the studio to record three songs, two of which — "Stop The War" and "The Doubt Within" — were released in May as a special DVD single along with Paul's video message to all fans who bought the single and thus helped raise funds for his upcoming operation.

The WARHORSE single is Di'Anno's first music release after a seven-year hiatus due to severe health issues. The band was formed by Di'Anno and two guitarists/authors, Hrvoje Madiraca and Ante "Pupi" Pupačić.

WARHORSE plans to record an entire album in a very short period of time, so that they can announce their first performances in the summer of 2023.

WARHORSE released 666 bundles containing the DVD single and event t-shirt from Paul's comeback concert in Zagreb as part of a pre-sale and in less than two months almost all of them were sold out. Some of the last remaining signed copies are available from www.maidencroatia.com/warhorse.