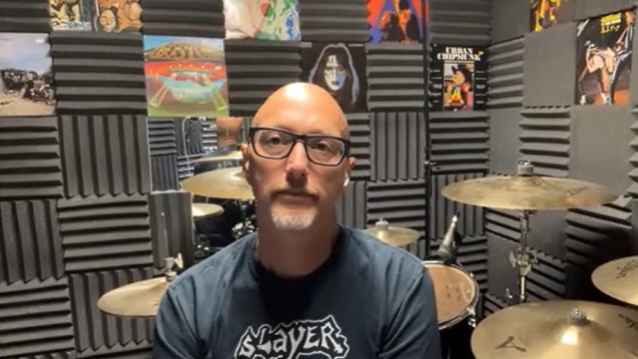 The 56-year-old musician, who joined MACHINE HEAD in 1995, announced his departure from the California metal band in October 2018. McClain, along with guitarist Phil Demmel, went on to complete the Robb Flynn-fronted act's "Freaks & Zeroes Tour" before they both officially exited the group.

Speaking about his decision to leave MACHINE HEAD, McClain told "Talk Louder" (as transcribed by BLABBERMOUTH.NET): "It was just time. And to sit there and talk about all the things that led up to that… It's kind of like just stuff that I would tell you guys in a private [setting], but I think for people who… Because I love when people come up to me with MACHINE HEAD albums — any album. It's amazing. For me to have been… 'Cause those records — specifically 'The More Things Change…' and then 'Through The Ashes [Of Empires]' and 'The Blackening' — those records were a part of people's lives, and that's something that, being a musician, when that happens, that's the lucky part… So for me to talk about all that stuff that led up for me personally to leave, it was just something that… I talk about it with my friends, all my friends, and I will tell people or whatever, but just for fans and everything, I think it's probably better for them, if they wanna stay a fan of MACHINE HEAD or whatever — totally, man. You don't need to know all the stuff that was going down that led me, that led Phil Demmel to leave the band. It's almost like a kid, when the parents are getting divorced — you don't need to know all the stuff that's going down with your parents. It was just something that I didn't wanna be a part of anymore, and that was partly the music, the direction of everything, and a lot of other things. And for me personally, it was just something that I had [to do]. For me, just to be happy with anything you're doing is more important than anything."

In a 2020 interview with Australia's Wicked Pix Photography, Dave said that he "definitely [had] no regrets" about his decision to leave MACHINE HEAD. "It's something to this day, almost every day, I'm thankful that I did it," he explained. "And I'm sure Phil is too. We talked about it. We're both in a good spot.

"He actually beat me to the punch," Dave continued. "He quit. 'Cause he had called me, and he was, like, 'Hey, I quit.' And I was, like, 'What? I'm gonna quit. I'm quitting first.' So it was kind of like this thing where he did it. And I was on my way to practice, with no Phil there, and that's when it happened — when I was in the practice room. [Robb] was, like, 'Hey, Phil quit today. We should probably talk about this.' And I was, like, 'Okay, well, I quit too.'"

Unlike Demmel, McClain had plenty of time immediately following the completion of MACHINE HEAD's fall 2018 tour to look back on the experience of playing in the band for more than two decades and the circumstances that led him to walk away from it.

"When we came back [home] from that last tour, that day, that next day, [Phil] texted me and he was, like, 'Dude, I'm gonna go play with SLAYER,'" Dave recalled to Wicked Pix Photography. "So he had like a bazillion SLAYER songs to learn and do all this stuff. I think I probably had a good three weeks of processing everything that went by. I remember I saw him when he came back [from filling in for Gary Holt on the SLAYER tour], and he was, like, 'Dude, you look different. You look so happy.' And I'm, like, 'I am.' And he's, like, 'I haven't been able to process this whole thing yet.'"

According to McClain, there were a lot of mixed emotions associated with his departure from MACHINE HEAD. "It wasn't just a happy thing we were gone," he explained to Wicked Pix Photography. "There was a lot of anger in it to where, like, I've gotta quit this thing that I've been a part of for 20-something years. So I was pissed off at that — that something that I loved became something that I didn't enjoy anymore."

In a June 2019 interview with "Robb's MetalWorks", McClain said that he no longer believed in MACHINE HEAD's songs and direction prior to his departure from the band.

A few months after McClain and Demmel quit MACHINE HEAD, Phil said that the band "became a Robb Flynn solo project" and he described his last few years with the group as "basically collecting a paycheck." Demmel also said that the musical side of MACHINE HEAD took a sharp turn for the worse during the writing stage for 2018's "Catharsis", an album that he said he hated.

The day he announced McClain and Demmel's exit from MACHINE HEAD, Flynn released a video message in which he blamed the split on the fact that he and his bandmates had "grown apart as people. Musically, we've grown apart. I have held on too tight to the reins of this band, and I have suffocated those guys." He went on to say that his "rough edges" had given MACHINE HEAD the success that it has, but they also "hurt the people around me. I've got a lot of drive, but I've got a lot of anger and rage. And that drive of mine has alienated folks in the band," he said.

In early 2020, MACHINE HEAD completed the North American leg of its 25th-anniversary tour for the band's debut album, "Burn My Eyes". Each show on the trek consisted of two parts: part one saw Flynn and bassist Jared MacEachern performing alongside new recruits, Polish guitarist Wacław "Vogg" Kiełtyka (DECAPITATED) and British drummer Matt Alston (DEVILMENT, EASTERN FRONT); while part two featured "Burn My Eyes" played in its entirety for the first time ever, with original "Burn My Eyes" drummer Chris Kontos and guitarist Logan Mader joining in.

McClain rejoined Arizona thrashers SACRED REICH in December 2018 and recorded the band's first album in 23 years, "Awakening", which was released in 2019 via Metal Blade Records.