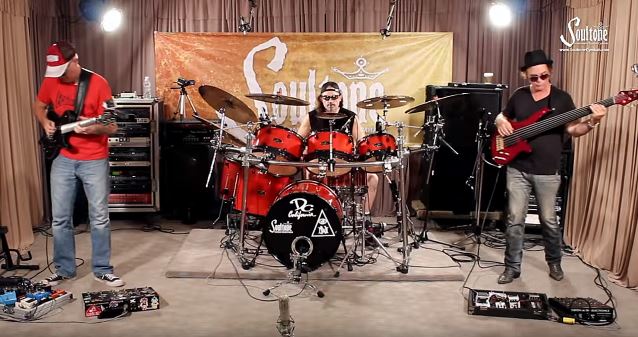 Former MEGADETH guitarist Chris Poland has commented on the passing of his OHM: bandmate Nick Menza. He said: "There are no words... just to describe what a great guy he was, let alone his creative ability and amazing talent. Not enough words to describe. Just devastated right now."

He continued: "My wife showed me a photo he just Photoshopped from when he was up north, where he looks like atlas holding up that ring. I mean, that's the kinda stuff he did just off the top of his head. I honestly think God ran out of ideas and had to have Nick, like, help him out. Because... why else?

"When I was recently in the hospital, he was on the phone with my wife the whole time, just begging her to make her dinner, asking, 'Can I go get you guys anything? Do you want me to go shopping?' Who does that? You know, there's not enough words to describe."

Added OHM: bassist Robby "Pag" Pagliari: "Stunned. Just stunned. Such a kind generous human being and great dad. Probably the happiest he's been in a long time. He got a chance to see his kids for a couple weeks.

"In a year, we've lost so many talented people — we just lost another one... Great guy, great player, most importantly great guy.

"We're devastated with what happened."

Menza officially joined OHM: last year following the passing of the band's previous drummer, David Eagle, who suffered a heart attack and had open-heart surgery in May 2015.

Below is a professionally shot video of the most recent OHM: lineup performing the song "System of A Clown" from OHM:'s "Circus Of Sound" CD, released in 2008 by Mike Varney's Tone Center Records.

Menza passed away Saturday night (May 21) while performing with OHM: at The Baked Potato in Studio City, California. He was 51 years old.

Nick collapsed during the third song of OHM:'s set. Early reports indicate he suffered a massive heart attack and was pronounced dead upon arrival at hospital. No other details are being released at this time.