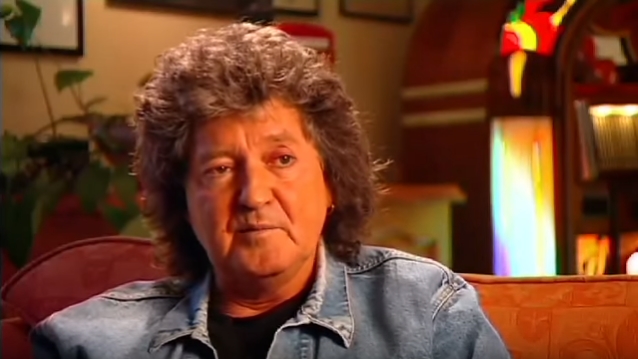 Ex-OZZY OSBOURNE Bassist BOB DAISLEY On 'Bark At The Moon' Era: 'To Be Honest With You, I Didn't Really Want To Go Back'

In a new feature by music journalist Joel Gausten, veteran bassist Bob Daisley (OZZY OSBOURNE, RAINBOW, URIAH HEEP, Gary Moore) discusses a variety of topics, including his new project THE UPSTARTS, the passing of former OZZY OSBOURNE/URIAH HEEP drummer Lee Kerslake, URIAH HEEP's missed opportunity to break into America and his return to the Osbourne camp for 1983's "Bark At The Moon". An excerpt from the feature appears below.

Although Daisley's body of work boasts plenty of undisputed heavy hitters, not every release to feature his name succeeded in capturing widespread attention. When asked to name one release that he felt deserved more listens, he was quick to point to "Abominog", his excellent yet tragically overlooked 1982 album with URIAH HEEP.

"It was released in England, and then it was released in America through Bronze Records," he said. "'Abominog' had started to make waves in America; we had a song on that album, 'That's The Way That It Is', that was getting airplay on MTV. It was getting recognition, and the album was starting to get some airplay. Geffen Records became very interested in it. David Geffen went to [Bronze Records owner] Gerry Bron and asked if he would release the 'Abominog' album through Geffen Records. David loved the album, but Gerry Bron said, 'Well, yeah, you can have URIAH HEEP if you take MOTÖRHEAD and GIRLSCHOOL, too.' David said, 'No, I don't want MOTÖRHEAD and GIRLSCHOOL. I want URIAH HEEP; I want this album.' Gerry said no, and that blew it for us, because David Geffen at that time had just had a huge hit with the John Lennon album ['Double Fantasy']. Geffen Records was huge. He could have done all sorts of things for that album, but Gerry Bron blew that for us. A lot of people love that album, but it really didn't get to see the bright light of day like it could have and should have."

This lost momentum plagued URIAH HEEP's fortunes going into 1983's "Head First", after which Daisley left the band to return to the Osbourne camp in time to appear on "Bark At The Moon" later that year.

"To be honest with you, I didn't really want to go back to Ozzy, but I kind of had to," he said. "Things weren't taking off like I had hoped for with URIAH HEEP, and it was down to really getting the record company behind it and doing something with it, which they didn't. We passed them a really good ball, and they wouldn't run with it."

Although Daisley's tenure in the band was short-lived, it gave him another chance to play alongside "Blizzard Of Ozz"/"Diary Of A Madman"-era Ozzy drummer Lee Kerslake, who had originally played with URIAH HEEP from 1971 to 1979 and returned after his dismissal from the Osbourne camp in 1981. The two remained friends in the ensuing decades, even reuniting a third time in the mid-2000s as part of the supergroup LIVING LOUD with singer Jimmy Barnes and DEEP PURPLE/DIXIE DREGS guitarist Steve Morse. Sadly, Kerslake died last year at 73 after a year-long cancer battle. The months that followed saw the posthumous release of the drummer's first-ever solo album, the fantastic "Eleventeen", and a 50th-anniversary reissue of "Orgasm", his sole album with the band HEAD MACHINE. Daisley finds comfort in knowing his old friend is finally at peace.

"To be honest, I was relieved when he went, because he was not having a good time," he said. "He was suffering; he was in pain — but what a soldier. What a brave man he was, because he was going through all that and still did a good album. That's amazing, you know. It's like, 'Okay, I've got to leave and I'm going through shit, but I'm going to leave this for the world to have a listen to after I'm gone.' That's what he did, and it was great.

"Lee's heart was in the right place, and he played from heart, too," he added. "You can have musicians who are great players and virtuosos, and they can be slick and impressive and all that, but playing from the heart is the most important thing. Lee was like that."

The complete feature is available at www.joelgausten.com.