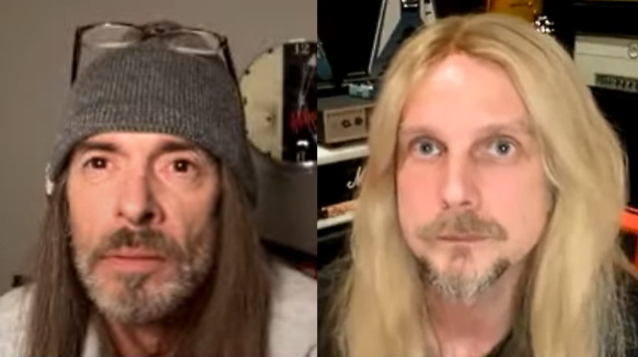 In a new interview with Tone-Talk, former PANTERA bassist Rex Brown was asked if there are any guitarists he would still like to work with. He responded (as transcribed by BLABBERMOUTH.NET): "I did a record — it's not out yet — I did it with Richie Faulkner [of JUDAS PRIEST]. Richie and I have become really good friends. And it's really progressively heavy and cool. Richie is a very melodic player, and then it's got my drummer that played on my first solo record. They tracked him playing on one of those electronic kits, and they sampled the sounds into a real kit — which I'm not too crazy about; that's not the way I would do it. But it's Richie's record. And he's got a new singer now. I don't know when that's coming out. Those guys [PRIEST] are still touring. That was a real thrill."

Brown previously hinted at a collaboration with Faulkner during a February 2021 interview with Antihero. At the time, he said that he had just gotten out of the studio with a good friend of his whom he described as "one of the best guitar players in the business that you would know." Asked if the recordings were going to be used for another Brown solo album or if it was more of a band project, Rex said: "[It's] more for another kind of deal. And I don't want to really talk about it… But the tracks are fucking badass." After Rex asked the interviewer Mark Dean where he lived, Dean responded "just outside Manchester in the U.K.," to which Brown said: "Then you would know this guy very, very well. He moved to Nashville and became a very, very good friend of mine. And we just cut six just blazing fucking tracks. Un-goddam-real."

The British-born Faulkner moved to Nashville in 2019 after spending several years living in Florida.

During an appearance on the "In The Trenches With Ryan Roxie" video podcast in February, Richie confirmed that he had used some of the coronavirus downtime to work on a solo project. He explained: "I haven't really spoken much about it publicly, but there is something I've kind of been [putting] together during the COVID period. I mean, I know we're still going through it but there's been a lot of downtime. So I've used that time to kind of get some songs I've been working on, get them together, polish them up, get some people together that I respect in the music business and record some stuff. And I haven't spoken a lot about it. It's in the process of being finalized, and we're looking for deals and stuff. We're looking for deals at the moment, we're looking for record labels, so I don't wanna get too far ahead of myself."

Asked if the album will feature guest musicians or it will be presented as a complete solo effort, Richie said: "Well, I've always been into the band. It's never been like RICHIE FAULKNER'S RAINBOW or anything like that. I've always been into the band — with the band name and the four or five guys or girls in it rather than a solo project. But also, when I joined PRIEST, I didn't wanna sort of get the gig and then, straight away, 'Oh, now listen to my solo thing.' PRIEST, they welcomed me in, they gave me a voice, they gave me an opinion, and I felt like this was my band. They've made me a part of it and I gave back a thousand percent. So I didn't wanna sort of then do my own thing and abuse that opportunity, if you know what I mean. But 10 or 11 years in, I feel that fans know that I'm not gonna abuse that opportunity. I've given 10, 11, almost 12 years [to PRIEST] now, so I felt, with the pandemic as well, with a bit of downtime, maybe put some stuff into that."

As for the musical direction of his solo album, Faulkner said: "As far as stylistically, it's always hard to tell, really. You just do what you do. You can hear where the roots are, from PRIEST, but I think it's different enough to be its own monster. And then hopefully someone else interprets it in their own way and hears something completely different to what I hear, hopefully."

Last September, Faulkner suffered an acute cardiac aortic dissection during PRIEST's performance at the Louder Than Life festival in Louisville, Kentucky. Faulkner was rushed to the UofL Health - Jewish Hospital where the cardiothoracic surgery team needed approximately 10 hours to complete a life-saving surgery.

Rex, who is currently promoting the 30th-anniversary of PANTERA's sophomore major label album, "Vulgar Display Of Power", recently completed work on a "a really introspective" follow-up to his debut solo album, "Smoke On This…", which was released in July 2017 via Entertainment One (eOne). The effort marked the first time in Brown's career where he served as both lead vocalist and guitarist in a band.