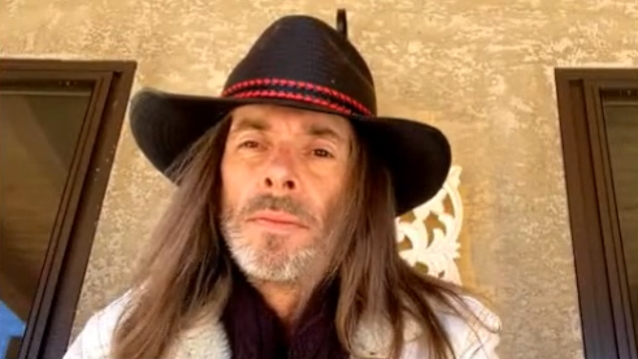 Ex-PANTERA Bassist REX BROWN Says He Got Burnt Out On The Grind Of Touring: 'I Don't Miss That At All'

In a new interview with Ampeg SVT Time Live, former PANTERA bassist Rex Brown spoke about how he scaled down his touring activities in the last few years prior to the release of his debut solo album and his departure from KILL DEVIL HILL.

"After Dime [late PANTERA guitarist 'Dimebag' Darrell Abbott] got murdered, instead of going to some place like freakin' Wyoming or somewhere to get my head together, I had to keep working," he said (see video below). "I had a friend, the guy that [produced DOWN's] 'Down II' [album], Warren Riker, had moved out to California, and so I drug the family out there and I just used a different name and I played on probably 50 records at Ocean Way [studios]. So I've always kept busy. And then DOWN came right after that, and I did that for another six years. And then I did KILL DEVIL HILL. And finally, by the end of that, I was going, 'I've been doing this on-the-road [thing] for damn near 30 years.' And I was just burnt.

"I've got twins," he continued. "The kids were about 14. I just said, 'Let's just take two years off.' Eight months later, I was back in the studio. It's just always been my deal. Since then, I haven't been back on the road except for one European tour in 2017.

"I miss the camaraderie of playing with guys in a room and jamming. I do plenty of that. But I don't miss all the grinding 22 hours of the day, sitting around wondering what you're gonna eat. I don't miss that at all."

Despite his distaste for the touring life, Rex said that he wants to play some "select shows" in support of his upcoming second solo LP.

"We've got some things in the coffer that are looking good as soon as this thing will open up," Rex said. "It's about safety for everyone. For me, it is. I don't wanna get anybody sick. These super-spreader things I definitely don't wanna have any part of. That's just where I'm at right now. I definitely wanna tour on this next record."

Rex, who is currently promoting the 20th-anniversary reissue of PANTERA's final opus, "Reinventing The Steel", has completed work on a "a really introspective" follow-up to his debut solo album, "Smoke On This…", which was released in July 2017 via Entertainment One (eOne). The effort marked the first time in Brown's career where he served as both lead vocalist and guitarist in a band.