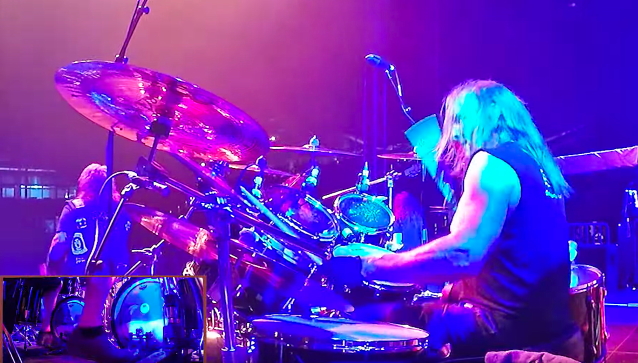 Drummers From Hell has uploaded drum-cam footage of EXODUS's Tom Hunting performing the song "Deathamphetamine" with his bandmates on February 19 in Wroclaw, Poland during "The Bay Strikes Back 2020" European tour. Check it out below.

Last month, EXODUS guitarist Gary Holt told Finland's Kaaos TV that he hoped the band will enter the studio this summer to make the follow-up to 2014's "Blood In Blood Out" album.

Gary went on to say that he has "a lot of stuff" already written for the next EXODUS LP. "I never stop writing," he revealed. "I've got enough riffs for five albums right now. I'll keep writing right up till we start recording."

As for a possible release date for EXODUS's new effort, Holt said: "I hope to have it out this year — like late in the year. We'll see how the scheduling goes and all that."

"Blood In Blood Out" marked EXODUS's first album since the departure of the group's lead singer of nine years, Rob Dukes, and the return of Steve "Zetro" Souza, who previously fronted EXODUS from 1986 to 1993 and from 2002 to 2004.