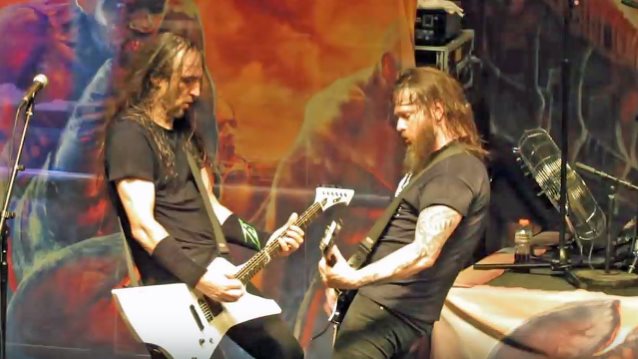 EXODUS To Release First-Ever Guitar Book, 'Pleasures Of The Frets: The Guitar Anthology'

San Francisco Bay Area thrash metal legends EXODUS will release their first-ever guitar book, "Pleasures Of The Frets: The Guitar Anthology", on October 17. The book features guitar tab and notations of twelve songs from the EXODUS catalog transcribed note for note from the original recordings by touring guitarist Kragen Lum, with a foreword by EXODUS's guitarist and main songwriter Gary Holt.

When asked Caleb Smith of New Zealand's The Sick Room radio why "Pleasures Of The Frets: The Guitar Anthology" exists in this particular format, Kragen said: "The vast majority of guys and girls who play this kind of music don't have the formal musical education, so they don't know how to write it down, they don't know how to read note for notes and I think some of them don't even know how to read tablature; they just learned from picking up a guitar and taking some lessons maybe earlier on, mostly learning by creating. I know that Gary developed his style on his own and he has a very specific technique and creative library. He doesn't sound like anybody else when he writes the riffs."

Kragen spoke about the process of transcribing the material, explaining: "I was lucky to be able to have the musical education to use my training by just listening. When I started playing with EXODUS and learned all the songs by ear, there were a few parts here and there where the production, especially in the older recordings, aren't quite as good and we're just really difficult exactly pick out what they're playing."

Accoding to Kragen, the most difficult part about transcribing EXODUS's early material was "figuring out the guitar solos. What they played on the album is not what they played live and going back and figuring out exactly note for note was the most challenging thing by far," he said.

Lum said that he was meticulous in his effort to exactly and precisely translate the notes from the individual guitarists of EXODUS who played on the band's albums. "I would send mostly Gary samples, but for the most part I just did it on my own," he said. "I've been fortunate enough to tour with all of the EXODUS guitarists, Rick [Hunolt] played and filled in for Gary before I did. It was cool to have first-hand knowledge watching these guys play and they all have very different styles. Gary, for example, is what I call a 'lick guy', where he's got his 'lick library,' and puts all his licks and solos together. Lee [Altus] kinda tried to compose his solos and is more influenced by classical stuff, as strange as that might sound, and that's how he puts all his stuff together. Rick does a lot of cool blues licks that have a totally different feel and some of the stuff he played was kind of the hardest to figure out. The stuff on 'Bonded By Blood', they were really young and Rick hadn't totally developed his style by that point; [that] was really hard to figure out. Some of the stuff sounded like it was played through a turbine [laughs], but it was really cool to decipher what they were doing."

Regarding what makes "Pleasures Of The Fret: The Guitar Anthology" different to other guitar books, Lum said: "The way the transcriptions are laid out. Most guitar books will have the rhythm and then one staff and then do as few pages as possible and save space in the book for the transcriptions to make it as profitable as possible. My goal was to be able to lay everything out, so that if somebody wanted to play and follow through everything that Gary played in the song, rhythm and solos and whatever, they can read just his staff of music. And the same with Rick and Lee on the different songs those guys did. I even included a third staff just for the harmonies. So it's laid out so people can really dig into what is in the recording and there is no guesswork."

The book is available for pre-order right now at the new SubLevel Recordsonline store.

"Pleasures Of The Fret: The Guitar Anthology" has been a labor of love and is "long overdue," said Kragen. "EXODUS should be in the top five of thrash bands, and it was really cool to be able to do something like this." 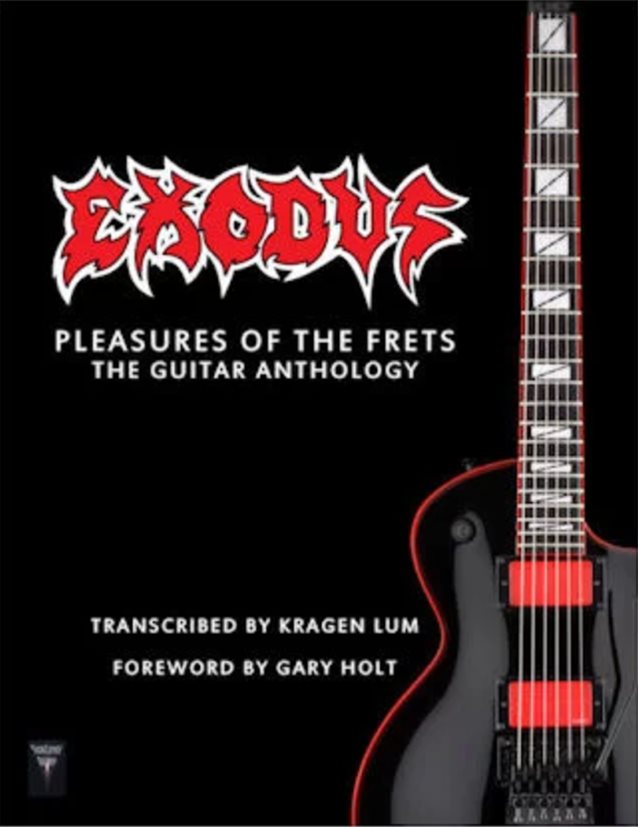