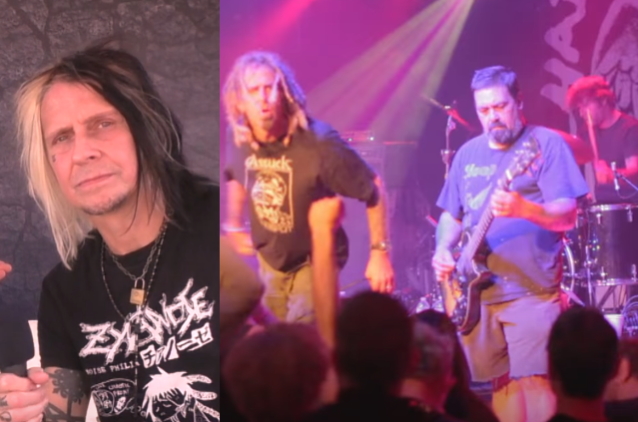 EYEHATEGOD's MIKE IX WILLIAMS: RANDY BLYTHE 'Used To Beg Us To Sing One Of Our Songs' At Our Early Concerts

In a new interview with the "Mike James Rock Show" conducted at this year's Bloodstock Open Air festival at Catton Park, Walton-on-Trent, United Kingdom, EYEHATEGOD vocalist Mike IX Williams touched upon the band's fall 2016 U.S. tour with DISCHARGE and TOXIC HOLOCAUST which featured LAMB OF GOD's Randy Blythe filling in for Williams. Regarding how the pairing came about, Williams said: "Randy is an old friend of ours. I met him when he was just a little kid coming to EYEHATEGOD shows, being annoying. He used to ask — beg us, actually; I shouldn't say ask — he would beg us to sing one of our songs during the set in Richmond, Virginia, where we played. So it's pretty interesting."

Williams underwent a liver transplant in 2016 after fans pledged more than $50,000 thanks to a crowdfunding drive.

He later said that it was "totally strange" to see Blythe and PANTERA frontman Phil Anselmo guest on EYEHATEGOD's live dates while he recovered from the surgery.

He told Clrvynt in a 2017 interview: "The idea to get Philip to sing was my idea, and the idea to get Randy was also mine. I didn't want to cancel that DISCHARGE tour.

"This is my band, and whether I'm there or not, I want to do it. It's always gonna be part of me. So, when I found out I was absolutely too sick, we had already had Philip do some shows, so we got Randy to do some others. I just didn't want to cancel and let down more people. They at least got to see EYEHATEGOD, even if it was a different version of the band."

"It was crazy to watch — totally strange to watch somebody in my spot onstage — but it's another part of the game and another chapter in this weird band that I'm in," he admitted. "It's life."

When it was announced that Blythe would sing for EYEHATEGOD on the 2016 tour, Williams said in a statement: "We've known Randall since the early '90s when EYEHATEGOD would pass through Virginia and he'd offer for us to crash at his crib after our gigs. Great times and we became great friends. To have Mr. Blythe on board as a fill in for me on vocals for this run is a true 'circle-stays-unbroken' turn of events!

Blythe added at the time: "Anyone who knows me well knows that I am a massive EYEHATEGOD fan. I've seen them play more times than I can remember, my old side project covered 'Dixie Whiskey' for an EYEHATEGOD tribute album, I wear their merch, I even have a freaking EYEHATEGOD tattoo that I got in New Orleans. They are one of my favorite bands of all time, period. I've also been friends with the guys in the band since the '90s... actually, I knew them before I knew the dudes in my own band, and EYEHATEGOD would often crash at my crib when they came through Richmond."

Last month, EYEHATEGOD announced the "A History Of Nomadic Behavior" tour. Catch the band on tour starting on September 16 in Austin and wrapping on October 2 in Fayetteville.

EYEHATEGOD has been touring non-stop in support of its most recent full-length album, "A History of Nomadic Behavior". The 12-track effort was produced by EYEHATEGOD, Sanford Parker (YOB, VOIVOD) and James Whitten (THOU, HIGH ON FIRE),with mixing by Whitten. The band recorded at HighTower Recording and Hypercube studios. The artwork for the LP was created by Gary Mader and Williams.