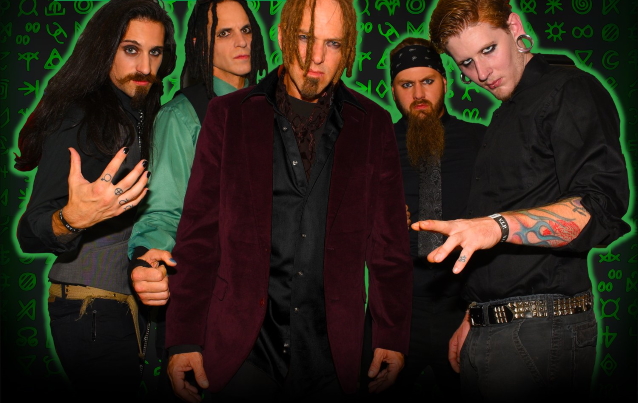 The official lyric video for the song "My Parasite" from FACE WITHOUT FEAR, the new industrial rock band featuring ex-STATIC-X and DOPE guitarist Tripp Eisen, can be seen below. The clip was created by NotFallingStudios.com from the U.K.

Eisen is joined in the group by Nick Sledge on bass, Kenny "Mantis" Hoyt (CRUSHPILE) on vocals, T.J. Cooke (METHODICAL) on drums, and Dante on guitar.

The first visit that Eisen made back to California after STATIC-X frontman Wayne Static's passing in 2014 was an emotional time for the guitarist. The mourning process involved spending some time with long-time STATIC-X friends and associates like Tony Campos. He had also re-connected with Ken Jay and they shared in the shock and sadness of the estranged singer's death. This trip inspired Eisen to pen two songs that he wrote as soon he returned, "Road To Hell" and "Love Kills". "Road To Hell" is slated for the upcoming STATIC-X album, but some unused parts of the song evolved into "My Parasite". FACE WITHOUT FEAR had been playing an early version of "Road To Hell", but with Eisen's collaborations with Campos and vocalist Xer0, the song was given up for what Eisen coined "Project-X", or what became "Project Regeneration".

"My Parasite" is the second collaboration between Eisen and Mantis, and features programming by veteran sound-artist Spydah, who has done several tracks for the band.

Eisen says: "The song is about the type of person that clings to another person and sucks the life, energy and finances from you. But it is also symbolic of the parasites on society that feed off of the rich, the poor or anyone that can act as a host. It's not a deep concept, but it's universal."

When asked about the timing of the song and the recent pandemic event of coronavirus or COVID-19, Eisen said that "it is a mere coincidence and unrelated."

Formed in 2017 by Eisen, FACE WITHOUT FEAR draws you in with gritty-yet-polished guitar work, electronic sampling, and metal vocals infused with surprisingly refined melodic phrasing. In their lyrics, the concepts of individualism, liberty and freedom, as well as the universal experience with human relationships encompass their lyrics. The band also takes inspiration from the conceptual and futuristic world of Ayn Rand, and is where the band's name is drawn from ("Atlas Shrugged: Part II", Chapter 9: "A face that bore no mark of pain or fear... It was a face that had nothing to hide or to escape, a face with no fear…")

FACE WITHOUT FEAR's live show features an album's worth of original material, plus a few treats for fans of Tripp's previous projects as well as a few dynamic updated covers by such artists at THE BEATLES, RAMONES and MISFITS.

FACE WITHOUT FEAR made its live debut last August at QXT's in Newark, New Jersey. Eisen first made his return to the live stage in October 2016 with his hair-metal band ROUGHHOUSE and they've played handful of headlining shows, as well as opening for STEEL PANTHER, among others.

Eisen — whose real name is Tod Rex Salvador — kept a relatively low profile for more than a decade since serving time for two statutory sex offenses in 2005.

Last October, Eisenissued a statement that attempted to set the record straight about his involvement in the STATIC-X reunion and his music on the upcoming new album "Project Regeneration". The band has yet to publicly respond to Eisen's accusations.