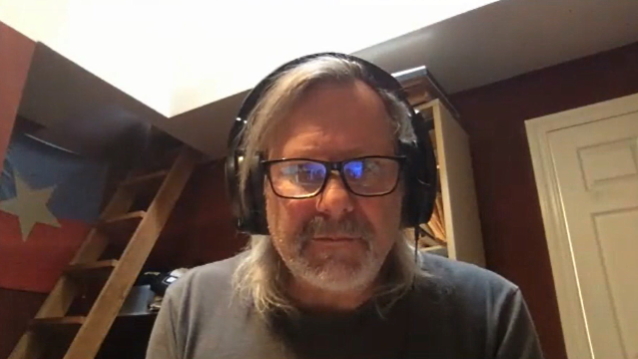 FAITH NO MORE's BILL GOULD Is Still Happy With 'Sol Invictus' Album: 'We Were Very Ambitious On This One'

Earlier today (Sunday, May 23),FAITH NO MORE bassist Bill Gould spoke with Darren Paltrowitz — host of the "Paltrocast With Darren Paltrowitz" — about the success of his Yebiga rakija brand, the motivation beyond launching rakija in the States, how spirit distribution and music distribution compare, future plans for FAITH NO MORE and his label, and more. You can now watch the chat below.

Speaking about FAITH NO MORE's comeback album, 2015's "Sol Invictus", Gould said (as transcribed by BLABBERMOUTH.NET): "We were very ambitious on this one. We recorded the album in our rehearsal room without telling anybody. So there were some limitations with that, obviously; it wasn't a real studio. So to make it sound good took a lot of effort. And I was pretty exhausted by the end of it; I don't know if I'd do it that way again. But I'm very happy with what we did and how we did it. It was a really ambitious goal, and I think we made it work. I think if we do something in the future, it'll be different, like they all are; all the albums are different. But I'm cool with this one. If we put it out, I'm cool with it."

Gould also talked about FAITH NO MORE's upcoming shows with SYSTEM OF A DOWN and KORN at the Banc Of California Stadium in Los Angeles in October. The dates were initially scheduled to take place in May 2020, and were moved back to May 21 and 22, 2021. The dates were recently once more postponed due to COVID-19.

Asked if it's fulfilling to play stadiums and arenas more than four decades after FAITH NO MORE's inception, Gould said: "It's great. It's really great. And it's also great that we still are who we are; we didn't really change our own way of doing things. We've always been kind of the black sheep in the music world, and I've always been a little frustrated that we never seemed to get it over the net — this thing that we thought was so great. And now we're being accepted for who we are, and I think that is absolutely amazing. That's a great feeling."

Earlier this month, FAITH NO MORE pushed its scheduled summer 2021 European shows back to the summer of 2022.

Chuck Mosley, who sang on FAITH NO MORE's first two albums, died in November 2017 "due to the disease of addiction," according to a statement from his family. He was 57.