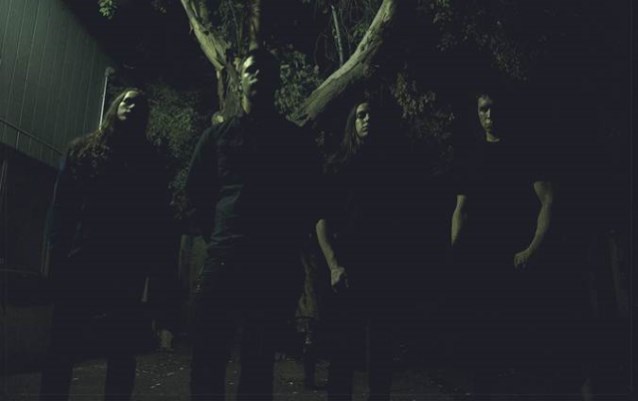 Progressive death metallers FALLUJAH are currently at Sharkbite Studios in Oakland, California with producer Zack Ohren (ANIMOSITY, SUFFOCATION, ALL SHALL PERISH, DECREPIT BIRTH) recording the follow-up to their highly praised 2014 release, "The Flesh Prevails". The as-yet-untitled-album is set to be mixed and mastered next month with Mark Lewis (DEVILDRIVER, CANNIBAL CORPSE, WHITECHAPEL, BLACK DAHLIA MURDER, CARNIFEX) at Audiohammer in Sanford, Florida. An early 2016 release via Nuclear Blast Entertainment is expected. Until then, catch the band on their European tour this December with CARNIFEX, WITHIN THE RUINS and BORIS THE BLADE.

Comments vocalist Alex Hofman: "We took a considerable amount of time off this year aiming to make not just a new record, but one that sets a new bar for not just ourselves but the genre as a whole. As we begin to enter the studio, we all agree that we've achieved exactly what we set out to achieve. We also have two of the best minds in the game right now (Zach Ohren and Mark Lewis),working together to make this record the best-sounding FALLUJAH release to date. There is a lot of stuff heating up right now, including new tours for 2016, and we couldn't be more excited! Stay posted."

FALLUJAH caused quite a stir in the music world with the release of its latest album, "The Flesh Prevails". It topped several "best of 2014" lists in not only the metal world, but in the progressive music community as well and won over scores of new fans with their fresh, emotive, and technically challenging music. As a result, FALLUJAH has paved the way for a new melodic and atmospheric perspective on death metal!

FALLUJAH's commitment to crafting forward-thinking music has helped them build their own die-hard fan-base from the ground-up through several releases; 2009's "Leper Colony" EP, 2011's "The Harvest Wombs" LP, "Nomadic" EP in 2013, and the aforementioned "The Flesh Prevails".

"The Flesh Prevails" was mixed, mastered and engineered by Zach Ohren at Sharkbite Studios over the course of a few months. It features guest appearances from Christian Muenzner (SPAWN OF POSSESSION, ex-OBSCURA, ex-NECROPHAGIST) and the voice of Roniit Alkayam. The cover artwork was a collaborative effort between Poland's Tomasz Alen Kopera and the band's vocalist, Alex Hofmann.