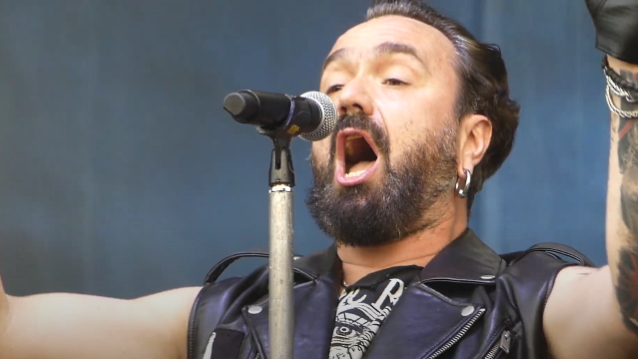 FERNANDO RIBEIRO: How MOONSPELL Has Managed To Avoid Dangers Of Drugs And Alcohol On The Road

In a new interview with Markus Morrison of Germany's "What's Metal" radio show, vocalist Fernando Ribeiro of Portuguese metallers MOONSPELL spoke about how he and his bandmates have managed to avoid falling into the trappings of alcohol and drugs in the three decades since the group's inception. He said (as transcribed by BLABBERMOUTH.NET): "When I grew up in the '80s in Portugal, we had a big heroin problem. My neighbors, a lot of people died; it was very heavy in Portugal. So I kind of was brought up in a situation where I witnessed that deterioration on a daily basis, not only from the people who addicted themselves but also from the families, the neighborhood, et cetera.

"One thing that we've always been very keen in MOONSPELL is that, yeah, we had our nights, we did our stuff, we tried a little bit of everything, but we never depended on it," he explained. "The problem is the way that the drugs, for instance, or the alcohol takes over you. So dependence was something we totally wrote off our vocabulary and we were very keen on it. And also the way that we feel the band is. We never thought that the band is ours to manipulate. Maybe musically we are free to do whatever we wanted — we exploited that freedom to a large extent — but I hate to see even friends of mine that are almost pulled by strings to go on stage or that they skip shows. It's disrespectful for everybody — for themselves, for their crowds. Because if someone comes here in Stuttgart [to see me perform], he or she doesn't care or doesn't have to care or doesn't know that yesterday I was drinking a bottle of absinthe in my bunk and today I can't perform.

"I think everybody has their meltdowns, their breakdowns, and that's human; it can happen to everybody," Fernando added. "But when you do it consciously, that you're having a Jack Daniel's bottle every night, people have to know there is a consequence and a price. And the price is that you kill something you like for something that you depend on. So you really have to have your priorities straight, and I think MOONSPELL always has."

This past August, MOONSPELL canceled its summer 2022 North American tour due to "unsolvable logistic and transportation problems".

In September, MOONSPELL released a very special Blu-ray/DVD and album, a live performance of their latest studio album, "Hermitage" (2021),with "From Down Below - Live 80 Meters Deep" via Napalm Records.

In 2020, MOONSPELL parted ways with original drummer Miguel "Mike" Gaspar and replaced him with Hugo Ribeiro (no relation to Fernando).