Speed N' Spikes is a series of five limited-edition split seven-inch releases from ten of the best underground thrash metal bands today. Volume five, the last in the series, features all-new and exclusive material from AVENGER OF BLOOD and WITCHAVEN. This split seven-inch is available now and includes the AVENGER OF BLOOD track "Hell Patrol" and the WITCHAVEN song "Awaken The Curse".

Issue one of the series featured Relapse artists TOXIC HOLOCAUST and Rochester's BLUDWULF and has completely sold out since its release. The second installment included new tracks from RUMPELSTILTSKIN GRINDER and the first new material from ABSU in nearly 10 years, with limited quantities remaining. The third edition features all-new tracks from ABIGAIL and NECROMANTHEON, while the fourth includes brand-new tracks from EARLY MAN and RAMMER. Each edition is pressed on colored wax and strictly limited to 1,000 copies, never to be repressed again. The Speed N' Spikes series also features collectible original artwork from Timothy Leo and Mike Wohlberg of The Fat Kid Illustration, with each volume making up a portion of a comic strip. 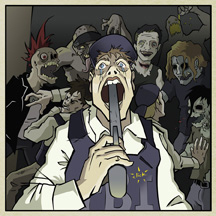