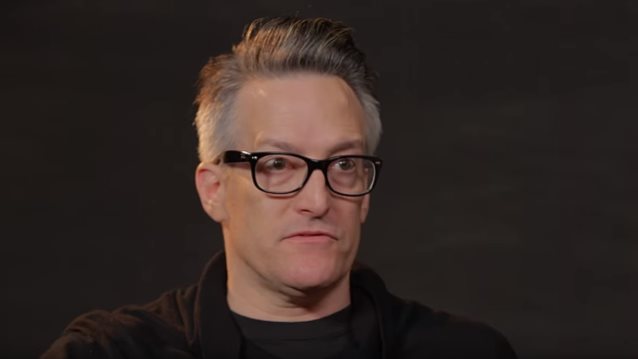 FILTER frontman Richard Patrick says that he was trying to help Scott Weiland when he publicly called out the former STONE TEMPLE PILOTS singer for abusing drugs a few months prior to Weiland's death.

Patrick said in an interview last spring that STONE TEMPLE PILOTS fans were the "biggest enabler" for Weiland. He explained: "The amount of shit that [the fans] give the band for trying to have a normal life… [The fans are] just sticking up for Scott, and they have no idea of [what is going on] behind the scenes." He added, "They're pushing him into his death, because they're making him believe that, 'Whatever I did is acceptable. And I can be as high as I want. And I can do as much drugs as I want.'"

Patrick noted that he didn't "work with people that are using," saying, "I fire people all the time, because it's, like, 'Hey, dude, I know an addict when I see it.'" The FILTER singer himself has been sober since September 2002.

Weiland later released a statement to BLABBERMOUTH.NET in which he responded to Patrick directly. He said: "Just so you know, and others do as well, I haven't had a needle in my arm in thirteen years.

"Overcoming my addiction to heroin was the hardest thing I've ever done, and I'm damn proud of the fact that the time in my life when drugs were stronger than my commitment to my health is so far behind me, and always will be.

"By the way, man, I recall when I DID do drugs, and you were one of the guys getting high with me. It's behind you, [so] please note and respect that it's behind me too.

"As for my issues with my former band — just remember the old adage that there are two sides to every story. I haven't been late for a show in a very long time. I have worked hard to be present and on time for my fans.

"I'm not perfect — no one is — but I have worked my ass off to repair the reputation I created by being thoughtless years ago.

"Why you felt the need to attack me is unclear but I am happy to set the record straight."

Now Patrick has explained the intention behind his original comments, telling Loudwire in a new interview (see video below): "Someone had done an interview, and I kind of forgot the tape recorder was on. And I was at a point on a tour with another band, and the lead singer was found in a car, passed out with a heroin needle in his arm. They were opening up for us. And the band played without him. And I was very frustrated that this really amazing singer was passed out in the car. And his mother was at the gig too. He borrowed his mother's car to go get dope. He told her he was getting guitar strings, which everyone knows we get guitar strings for free. And he passed out in his car, and his mother's, like, 'Where is he? Where's my son?' And it's horrible. Addiction's the most disgusting thing. So I was livid about that. And I said, 'What is with the amount of crap that STONE TEMPLE PILOTS is getting for trying to have a singer that at least can show up on time and sing the shows?"

He continued: "You know, Chester Bennington was in STONE TEMPLE PILOTS for a year and a half or so. And, you know, the amount of hate that they were getting on their own Facebook feed from their own fans — hate towards Chester and mad at the DeLeo brothers for just trying to have a normal career. And all this support, obviously, that kind of stuff is gonna tell the addict, like, 'See!' They're almost enabling this. And we can't have the audience just enable him to his grave. And I literally said that. Like, 'We can't enable him. We have to focus on trying to help him.' And I said it in that. I was a little taken aback when Blabbermouth reposted it and then it became this thing and Scott started responding to it."

Patrick added: "I've known Scott my whole life, and he's right: we used to party like motherfuckers, and it was great. I went to places in my mind with drugs I'll never be able to go to again, but I understand that. It was okay when I was in my twenties and it worked. But dude, we're far beyond… We both learned a lot. You can't go back there anymore. Certain things are done. And he wasn't getting that, and that's why he passed away."

STP began working with singer Chester Bennington in May 2013 after firing Weiland three months earlier, saying that his erratic behavior and pursuit of a solo career had been detrimental to the band.

Weiland, who has had a long history of drug problems, arrests and stints in rehab, was found dead on his tour bus on December 3 at the age of 48.