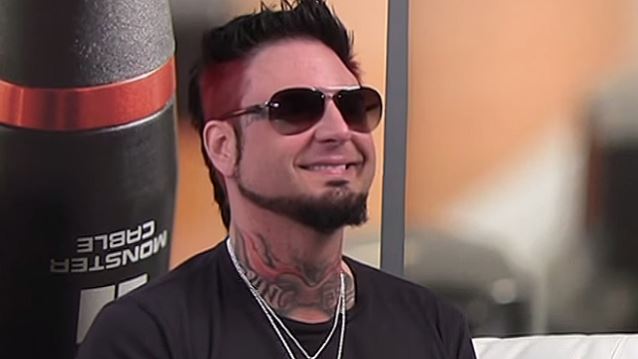 Las Vegas-based metallers FIVE FINGER DEATH PUNCH have already chosen a title for the follow-up to their 2013 double album, "The Wrong Side Of Heaven And The Righteous Side Of Hell", tentatively due later in the year.

Asked if the group has come up with a name for its new CD, which has been in the works since late 2014, FIVE FINGER DEATH PUNCH guitarist Jason Hook told Eric Blair of "The Blairing Out With Eric Blair Show" at last month's NAMM show in Anaheim, California: "We do. But you're not gonna get it." He added: "I have all these funny things I'm dying to say right now, but I'm not gonna say anything. 'Cause we've always thought about good joke titles, like FIVE FINGER DEATH PUNCH 'Keep Your Receipt'. No… [Or] 'Not Our Best Work'. No… I can't tell you the title."

Regarding whether there are any new FIVE FINGER DEATH PUNCH songtitles he can share with fans, Hook said: "Here's the interesting thing about that.. In the phase that we're in now… This is interesting… Or at least I think it is… The phase we're in now, it's music tracks. So we kind of do… Ivan's [Moody, vocals] sketching lyrics, but until they come together, we name them these arbitrary… anything, just so I can refer to it. So there's one that I just finished called 'Pulled Pork'. It won't be 'Pulled Pork' by the time it gets on there. [Laughs] By the time it gets to Active Rock radio, it will not be 'Pulled Pork'. But it's a contender for Active Rock radio, so we'll see what it's called by that time."

Hook also talked about a possible release date for FIVE FINGER DEATH PUNCH's next studio effort. He said: "Well, I know I have a deadline… I say 'I'… We have a deadline, and it's gonna be tight. But you know what?! Deadlines make for a focused work."

FIVE FINGER DEATH PUNCH drummer Jeremy Spencer was asked in a recent interview with JoeDaly.net what direction he thinks the band's sound will take on their next studio effort. Spencer replied, "I'm not sure. We always try to do things a little differently than the time before, but without being drastically different. We are who we are and I don't see us doing something so left turn that people are going, What is that? I just don't see that. We sound like what we sound like and I'm excited to see where it goes, honestly."

Spencer added: "I'm digging it, man. It's actually more brutal, with more extreme dynamics. There are some really mellow parts and then some really brutal parts. So we're running the whole gamut of sounds."

Guitarist Zoltan Bathory told The Pulse Of Radio that FIVE FINGER DEATH PUNCH is not afraid to take risks with its music sometimes. "We are here to step forward and take as much development in anything we do as it is possible, and that's the mentality and that's gonna be in every aspect," he said. "We're gonna kind of push the envelope, maybe go overboard here and there, but, you know, that's the idea."

FIVE FINGER DEATH PUNCH released "The Wrong Side Of Heaven And The Righteous Side Of Hell" in two parts, with the first arriving in July 2013 and the second following in November 2013. The first half alone has sold more than 468,000 copies in the U.S.