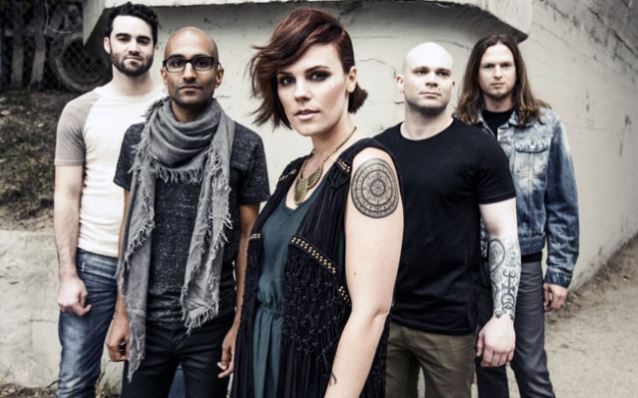 "Set Me On Fire", the new video from the alternative, hard rock band FLYLEAF, can be seen below. The clip was shot with director Noel Maitland (SPEECHLESS, KINGS OF SUMMER) in an abandoned warehouse in downtown Los Angeles. The explosive track marks the first single off the group's fourth studio album, "Between The Stars", which is set for release on September 16 via Loud & Proud Records.

"We're excited to release our first single, 'Set Me on Fire' and we can't wait for people to hear it," explains FLYLEAF lead vocalist Kristen May. "It's about the passion we feel when we first fall in love and our emotions are running high, along with our thirst for this great life and all it has to offer. There is so much beauty, excitement and hope in this world and when we collide with one another and fall in love, magic happens. I hope everyone turns this song up to eleven, and sings at the top of their lungs."

Other songtitles set to appear on the new FLYLEAF album include "Magnetic", "City Kids", "Marionette", "Thread" and "Well Of Lies".

After working with with producer Howard Benson (MY CHEMICAL ROMANCE, PAPA ROACH, HALESTORM) on the band's first three albums, FLYLEAF decided it was time for a change and turned to Don Gilmore, who has previously helmed recordings by LINKIN PARK, KORN, BULLET FOR MY VALENTINE and LACUNA COIL.

"Howard runs his studio like a laboratory, which I love — you go in there and you know exactly what's going to happen and it's all about getting these perfect sounds and these perfect takes," FLYLEAF guitarist Sameer Bhatacharya tells Billboard.com. "And with Don you go in there and it's total, like, 'Let's feel it out, man.' It's all about the spontaneity and the energy and the moment."