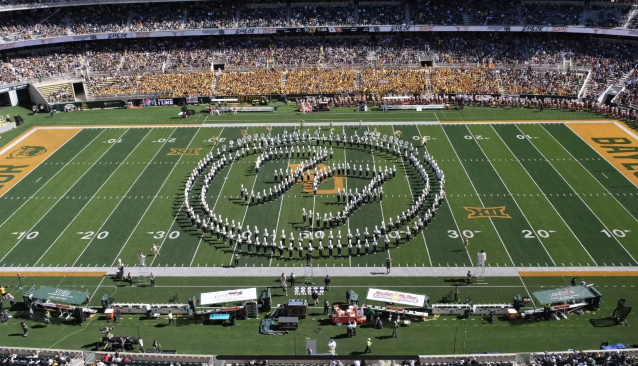 On October 30, the Baylor University Golden Wave Band honored FOO FIGHTERS and their Rock And Roll Hall Of Fame induction with a halftime performance of the band's songs "Monkey Wrench", "Holding Poison" and "The Pretender". The performance happened in Waco, Texas as the Texas Longhorns lost their second straight game in a row after letting up a fourth quarter lead on the road against the Baylor Bears.

On Monday (November 1),the Golden Wave Band shared photos and a link to the video of the performance and wrote: "This weekend, we debuted our halftime show celebrating 25 years of the FOO FIGHTERS and their recent induction into the Rock & Roll Hall of Fame!" FOO FIGHTERS shared the Golden Wave Band's post and included two exclamation points as a way of expressing their appreciation.

Comprised of approximately 300 members, the Golden Wave is the largest student musical organization at Baylor University and stands as an icon of campus tradition. The remarkable spirit of the Golden Wave Band comes from the enthusiasm of hundreds of such students who combine their collaborative talents and backgrounds to create a high-quality musical experience.

The Golden Wave performs both on and off the Baylor campus and travels to other university campuses during the football season. The band also makes frequent featured appearances at various regional and state-level marching contests including the Texas UIL State Marching Contest. The band performs innovative music and drill that represents both traditional and contemporary marching styles.

For over 110 years the Baylor University Golden Wave Band has stirred the hearts of Baylor fans with its powerful music and creative marching drills. The band is as much a part of Baylor tradition as the Green and Gold. Both on the field and in the stands, the members of the band create an atmosphere of excitement through outstanding musical performance and an unabashed spirit for Baylor football.

This weekend, we debuted our halftime show celebrating 25 years of the Foo Fighters and their recent induction into the Rock & Roll Hall of Fame!