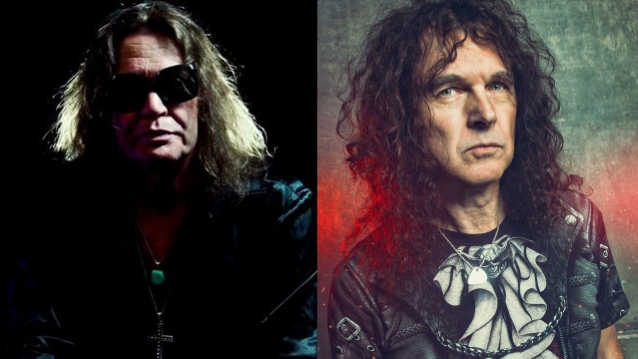 The current SAINTED SINNERS vocalist was recruited for ACCEPT's "Eat The Heat" album in 1989 following the departure of Udo Dirkschneider. Reece's higher-pitched delivery was in sharp contrast to Dirkschneider's distinctive style, and overall, the LP was a critical and commercial disappointment. Midway through the "Eat The Heat" tour, differences between the band and Reece had come to a head, leading to the altercation between the singer and Baltes in Chicago. By the end of 1989, ACCEPT had hung it up.

David spoke about the circumstances that led to his dispute with the bassist during a recent interview with Metalliluola. He explained (hear audio below): "Peter had told my girlfriend I was having an affair. And I asked him, 'Did you tell her?' And he said, 'Yes.' So I slapped him. That ended it. It was bad before that, the communication. Ticket sales weren't good. We were opening for W.A.S.P."

Reece, who has also played with BONFIRE and BANGALORE CHOIR, said that he thinks external influences were responsible for the ACCEPT singer change that resulted in him landing the gig.

"'Balls To The Wall' did four hundred thousand copies," he said. "Gold was five [hundred thousand]. The record company was saying, 'You need a platinum album. Get an American, get somebody who can sing a little more commercially. We'll break this band. You've got a foundation.' But you've gotta remember — I didn't choose ACCEPT; they chose me. I didn't force them to take me. And it didn't work. The fans were, like, 'What are you doing?' The new fans loved it.

"The crazy thing about ['Eat The Heat'] is night after night I hear, 'God, I hated you when this album came out. Now I love it.' It's crazy!"

Thirty years after "Eat The Heat"'s release, Reece still looks back on the LP fondly.

Reece recently completed a European tour as the support act for U.D.O., the German metal act fronted by Dirkschneider.

"I can honestly say, I was a little nervous to meet Udo [for the first time], because I took his job," Reece told Metalliluola. "They fired him and got me. But every day I saw him, he was always a gentleman. He wasn't arrogant. He was always friendly. He treated me with respect. So when I got the opportunity for the U.D.O. tour, I jumped on it."