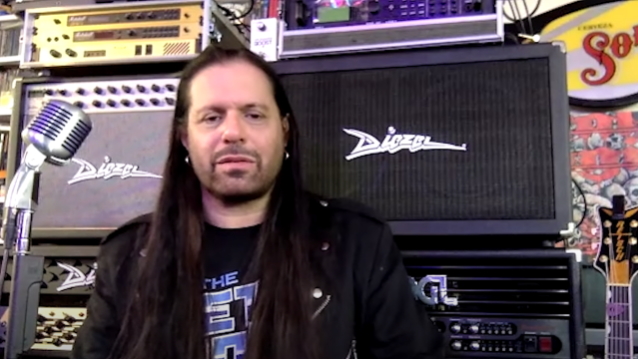 Former ANTHRAX singer Neil Turbin has released his acoustic cover version of "Hurt", a song originally written and recorded in 1994 by the American industrial rock band NINE INCH NAILS. The music video for Turbin's version of the track was recorded and filmed on April 12 at Redondo Beach Performing Arts Center in Redondo Beach, California.

Neil commented: "I was familiar with NINE INCH NAILS' 'The Downward Spiral' and eventually the Johnny Cash [version of 'Hurt'] around a decade later which helped shed new focus on Johnny Cash and his brilliant song and video performance.

"My reason for covering the song is having something in common with Trent Reznor besides being a singer songwriter and that is that I have been at the former house of his on Cielo Drive in Benedict Canyon. The feeling and energy I felt while there made the hair on my arms stand on end and gave me chills. I'm not saying that for effect. I just felt some very strong feelings that were not something I normally feel or hardly ever feel. With that being said, I went home that night and started to look up the address since intuitively I felt compelled to try to figure out why I was feeling what I felt. Once I researched it and found out the unbelievable history, I re-discovered this song after some time reviewing related songs. I felt very connected to this brilliant song."

Turbin performed and recorded with ANTHRAX on the original demo recordings and the band's debut album, 1984's "Fistful Of Metal". He wrote the lyrics to all songs on that LP with exception of the cover of Alice Cooper's "I'm Eighteen", and also has writing credits on five of the seven songs on the band's "Armed And Dangerous" EP (1985),as well as two songs on sophomore album "Spreading The Disease" (1985).

ANTHRAX has had a number of vocalists — including Turbin, Joey Belladonna, Dan Nelson and John Bush — over the last four decades, with guitarist Scott Ian and drummer Charlie Benante remaining the sole bandmembers who have appeared on every one of the group's studio albums.

Turbin sang on "Fistful Of Metal" before getting booted and being replaced by Belladonna. Belladonna performed on four ANTHRAX albums, including the fan favorite "Among The Living" (1987) before he himself was fired over creative and stylistic differences. Bush fronted ANTHRAX between 1992 and 2005 but was sidelined when the band reunited with Belladonna for a 20th-anniversary tour. When that collapsed, and relationships disintegrated with next frontman Nelson, Bush returned for a time before Belladonna took the job back in 2010.