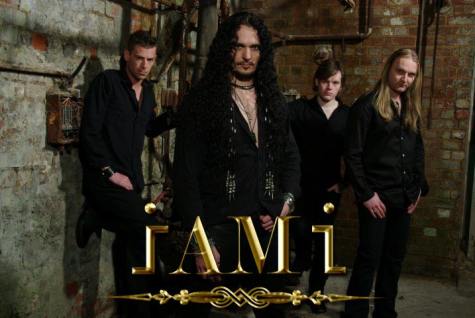 Greece's Rock Overdose recently conducted an interview with former DRAGONFORCE and current I AM I singer ZP Theart. You can now listen to the chat using the audio player below.

"This Is My Life", the first song from I AM I, can be streamed using the audio player below.

I AM I will release a promotional video for the song "Silent Genocide" later this month. The group, whose lineup is completed by Paul Clark Jr. on drums, Jacob Ziemba on guitar and Neil Salmon on bass, will make its live debut on Sunday, May 27 at Birmingham, England's O2 Academy 2.

I AM I's debut album, "Event Horizon", will be the first-ever heavy metal album to be released solely on USB. The stick will be packaged in a CD case and will include full artwork and all the usual content you would expect on a disc and more. Due on May 26, the effort is available to pre-order from the official I AM Iweb site.

Tickets for I AM I's debut show are limited to 600 and are also available from the official I AM I site. 600 special commemorative t-shirts will be produced for the gig and are an exclusive free gift for fans who buy tickets. The shirts will be numbered and will correspond with the ticket number and are sure to become collector's items.

Commented ZP: "['Event Horizon' is] an album of message. It's about past meeting future and everything in between. It's about warnings for the current generation not to go down the same road in the future as we are doing now as that will surely secure our demise. To see and not to perceive, to hear and not to listen, is the downfall of all... It's a new age of enlightenment and there's a lot of messages in the songs that will hopefully kickstart a few people who are slow on the uptake.

"My whole career has been leading up to this point and I've never been more proud of anything in my life and this album will definitely live up to its name."

Added Paul: "'Event Horizon' totally encapsulates my style of playing. Every song is different and that made me me push myself that much further in the studio. This is a great album with something for everyone."

Stated Ziemba: "It's refreshing to know we're in a team where everyone holds the same cards. Let the music speak for itself."

Said Salmon: "This is an album to suit many tastes. I'm sure variation will be one of its ultimate strengths."

DRAGONFORCE parted ways with Theart in March 2010 "due to insurmountable differences of musical opinion," according to a statement released by the British extreme epic power metal band.

After entries from thousands of hopefuls across the globe, DRAGONFORCE in March 2011 welcomed then-23-year-old Marc Hudson to the group.

"This Is My Life" audio stream: