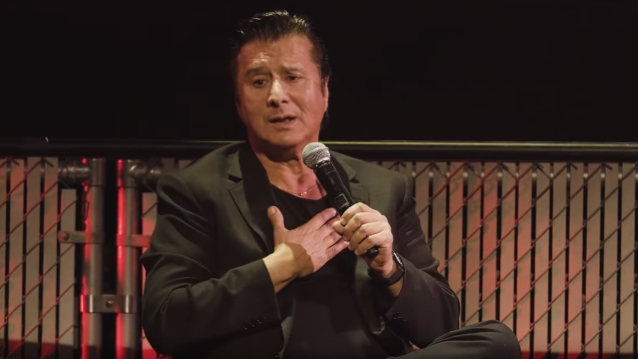 Former JOURNEY singer Steve Perry recently took part in a keynote panel at Pop Conference 2019 on how music makers and writers confront loss and grief. The event was produced by Jason King of New York University's Clive Davis Institute of Recorded Music and was presented in conjunction with Billboard.

Check out a video of the discussion below.

Last October, Perry released "Traces", his first album of new material in 20 years. He credited his late girlfriend, psychologist Kellie Nash, who died more than six years ago, with helping him want to sing again; she'd made him promise he wouldn't go back into isolation when she passed.

"When I had my profound loss with Kellie a few years back, being pulled into that moment deeper than I ever experienced before was a new place, to where everything that mattered, I thought, fell off," Perry said at Pop Conference 2019. "I sought professional help to really learn how to grieve, because I didn't know how."

"The professional I was going to turned to me and said, 'I think you need to cherish the grief,'" he continued. "I said, 'Excuse me, I'm tired of crying. I've been crying so much. It's been going on now, honestly, for months. And he said, 'I know that, but if you cherish the grief that you're in right now, I guarantee you there will come a time where you won't be able to access it as deeply and as clearly and in the moment as you are now. So I think as it starts to come up, and you start to get back to whatever happens once we do face the grief and cherish it, you'll be glad you did.' That's just been my experience. Everybody wants to pull out of it and get back to normal. I wanted just to move on. Now I'm so grateful that I didn't."

Upon its release last fall, "Traces" was met with wide acclaim and tremendous excitement from fans and critics all over the world. The album entered the Billboard 200 Albums chart at No. 6, Perry's highest debut as a solo artist and earned the Rock And Roll Hall Of Famer his best-ever chart entries in the U.K., Germany, Canada and Japan.