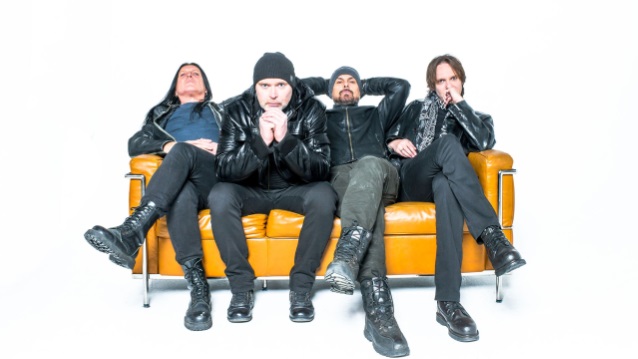 Former KAMELOT Singer ROY KHAN Is Back With Reunited CONCEPTION; New EP Due This Fall

Two decades since its last release, Norwegian hard rock band CONCEPTION has reunited with its familiar lineup: Roy Khan, Tore Østby, Ingar Amlien and Arve Heimdal. Having decided to control the process themselves, the bandmembers now turn to their fans via a PledgeMusic campaign to help generate the funds they need for releasing their brand-new material.

Since releasing the album "Flow" in 1997, the members have been working on separate projects, but fans never gave up hope of seeing them together as a band again. There have been rumors and speculations for some time about a possible reunion, and now they confirm they've been quietly working for some time on this new material.

Says singer Roy Khan (ex-KAMELOT): "It's great to be back together. The strong bond we have makes for a great foundation for creativity. We can't wait to present our new music which we feel shows development but still bears the signature of CONCEPTION."

Adds guitarist Tore Østby: "I can only agree with Roy. I think it's been a surprising experience for all of us to meet each other musically again and find where this work has taken us."

The decision to do this on their own has been unanimous, to explore the possibilities in having full control. They have already formed a team of professionals believing in the band's comeback. The band intends to raise money to release a single and EP in the autumn.

Khan (full name: Roy Sætre Khantatat) recently released his first-ever solo song called "For All". The track, which was written by Khan, was recorded at Stable Studios in Oslo, Norway in March 2018 and features Roy on vocals, piano and keyboards alongside Leif Johansen on fretless bass and Geir Olav Akselsen on all guitars.

After his departure from KAMELOT seven years ago, Khan, who is a devout Christian, joined a church in the coastal town of Moss, Norway. As an employee of Moss Frikirke, Khan worked with the youth, mainly with the choir and the skaters of the village. Roy stopped working at the church in September 2016, but is reportedly still living and working in Moss.

KAMELOT officially announced Tommy Karevik as its new lead singer in June 2012. The Florida-based band has recorded three albums so far with the Swedish vocalist: 2012's "Silverthorn", 2015's "Haven" and "The Shadow Theory", which arrived earlier this month.