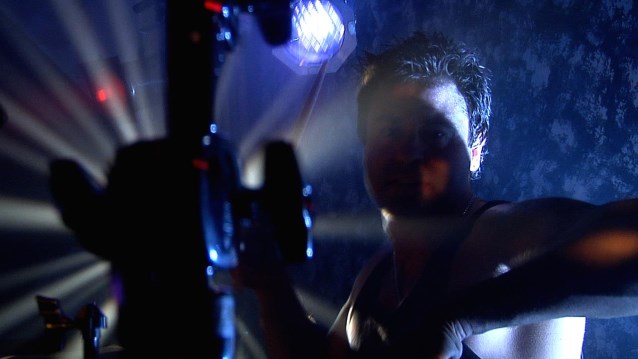 Former KORN drummer David Silveria had thanked the band's fans on the 20th anniversary of the release of the group's classic debut album and has apologized for not being able to celebrate the milestone by taking part in KORN's upcoming tour.

In a posting on his Facebook page, Silveria wrote: "To all the KORN fans around the world, I want to thank you with all of my heart for all of the success. Without the fans, KORN would just be a hobby.

"As we celebrate the 20th anniversary of our debut release, I can't believe it's been 20 long years.

"I'm sorry to all of the fans that I couldn't be there on tour to celebrate the anniversary, but that's just the way it goes.

"I can't tell you all how much I appreciate all of the support from the fans around the world. To you, I say thank you from the bottom of my heart. God bless you all."

KORN singer Jonathan Davis told The Pulse Of Radio a while back that he believed Silveria lost his passion for music. "David was there to write beats but he wasn't really there," he said. "He really didn't like playing drums. The first two albums, I think, he really enjoyed playing drums and then after that he just lost his love for playing drums. It happens. Okay, good for him, he wanted to move on and do something else."

KORN plans to celebrate the 20th anniversary of the release of the group's debut album by performing the disc from start to finish at selected shows on its upcoming tour itinerary. Davis told Philadelphia radio station WMMR, "We're gonna start doing, on festivals, we're gonna play the first album in its entirety. We're gonna start doing that. We're even gonna play [the song] 'Daddy'. And I said I would never do it, but I'm gonna do it anyway. So we're gonna do the complete album in its entirety and then tag on some songs at the end of the show. So it should be pretty cool."

KORN has never performed "Daddy" live, since the song is about Davis' painful memory of being molested as a child.

Davis told The Pulse Of Radio that he's amazed at where KORN is after 20 years. "I'm still blown away that it's been 20 years and we're still relevant, still making music, that people kind of don't count us out as just some nostalgic act, playing casinos and fairs the rest of our lives," he said. "You know, it's, we're still doing big things, which I'm very happy. I think everybody in the band feels the same way."

Davis added that the performance of the first album will be "very stripped down… It'll be kind of like that down-and-dirty, cool, old-school vibe."

KORN will head out on tour as special guests of SLIPKNOT on the latter's "Prepare For Hell" tour, which begins on October 29 in El Paso, Texas.