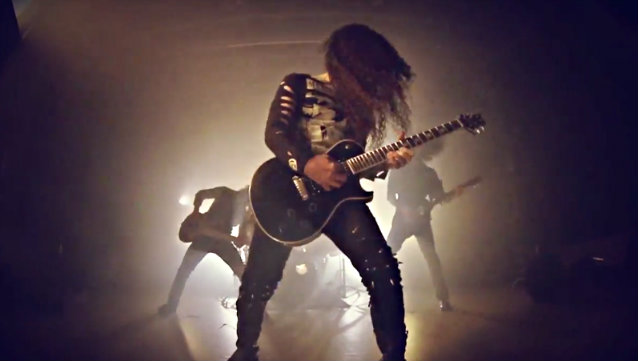 "Inferno", the new video from former MEGADETH guitarist Marty Friedman, can be seen below. The song is the title cut of Friedman's new album, which will be released in late May via Prosthetic Records (except in Japan, where the album will be made available through Universal Music). The video's concept is inspired by a television show called "Zenryokusaka" ("Full Power Hill") that airs weekly in Japan, where Friedman has lived for more than a decade and established himself as a popular TV personality. A two-minute compilation of some of Friedman's notable Japanese broadcasts can be seen below.

"The music video for 'Inferno' is an homage/parody of one of my fave Japanese TV shows, 'Zenryokusaka'," Friedman explained. "It's a weekly five-minute show where the entire premise is absolutely nothing but a girl running up a hill. Each week a different girl, and a different hill. I am hooked on this show, and think it is genius in its simplicity and ever-so-slight sexual nature. It took me a while to explain the charm of the show to the video director [David Brodsky], but I think towards the end of making our video together, he got it. It's like many things that happen outside the culture you were born in; you either get it and it's fresh or you don't and it's just weird."

Regarding his brand new collaboration with Becker — who was diagnosed with amyotrophic lateral sclerosis (ALS, a.k.a. Lou Gehrig's Disease) at age 20, shortly after joining David Lee Roth's band for the gold-selling 1991 album "A Little Ain't Enough" — Marty said: "[Jason is] able to make music, but he's not able to play guitar. If you see the [documentary] movie 'Not Dead Yet', you'll learn how he does it with his eye movements, because that's all he can move. But his brain is completely intact and his music has evolved, just like any other musician would have evolved over time. So it's really insane how his evolved his music is."

He continued: "I wanted to have one song where [Jason and I] could collaborate, just like we used to collaborate together in CACOPHONY. And what he did was he gave me a bunch of his musical ideas to choose from, and I chose from those, and then I arranged them. And I added my parts to those and I fleshed it out into a complete kind of an opus of a song — it's really long; it's, like, seven and a half minutes or something. And then it came to the point where now I've gotta play Jason's parts of have someone play Jason's parts. So, basically, I played everything that was electric. But there's an acoustic section of the song that I'd rather have an acoustic master play than me, 'cause I'm totally a half-assed acoustic player. So I had a friend of mine named Ewan Dobson, who is also a friend of Jason's, I had him play what Jason wrote and what I arranged of Jason's parts, I had him beJason. So I had him come into the studio and beJason, and I had him play exactly the way I had arranged Jason's material. And it was literally just like sitting in a room with Jason and having him play it, because [Ewan] didn't diverge from what was actually written at all, he just interpreted it exactly the way it was… It was written down — I arranged it, I had it written down — so he just nailed it completely perfectly and I wanted to make sure it was true to a Marty-and-Jason collaboration. I mean, [Ewan is] a fantastic guitarist — I would love to collaborate with him sometime — but on this, it was all about the Marty-and-Jason thing. So I had him do the Jason parts on acoustic, and I played everything else on electric. Of course, I play nothing like Jason."

He continued: "I played a rough mix for Jason the other day, and he just loved it. We finished mixing it this week.

"I wanna play it for everybody so bad, but I guess you'll just have to wait until May. I'm very pleased with it."

According to Friedman, his relationship with Becker has not changed since Jason was diagnosed with ALS more than two decades ago.

"To know Jason, to know his story…. Of course, ALS is the worst thing ever, it's an unbelievably sad, horrible situation," Marty explained. "But Jason, whenever [we are in contact with each other], ever since he's had it, it's the same as it ever was, just the same as friends. We never talk about, 'Oh, it's so sad, I'm so bummed, I'm so depressed.' We totally insult each other like we always did, we put down each other's favorite football teams, we call each other bastards… I mean, nothing has changed; his brain is just as perverted as he ever was. He's exactly the same. His spirit is just perfect. And just seeing him in that situation gives me so much inspiration. And now people will hear the incarnate of something that we've done together in 2014, and I'm just so glad that it's happening. And it's a very important part of my record. I mean, it's a big, important part of the record."