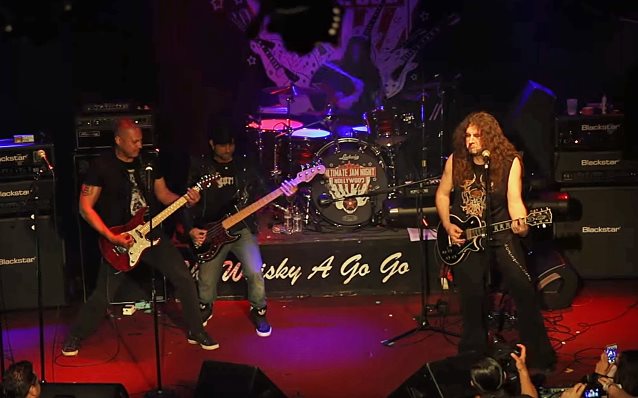 Former MORBID ANGEL drummer Tim Yeung and ex-GOD FORBID guitarist Doc Coyle paid tribute to late MEGADETH drummer Nick Menza with a performance of the MEGADETH classic "Symphony Of Destruction" during this past Tuesday's (May 24) "Ultimate Jam Night" at the world-famous Whisky A Go Go in West Hollywood, California. They were joined by Howie Simon (guitar, vocals) and Ben White (bass). Check out video footage below (courtesy of California Rock News and Alex Kluft Photography).

"Ultimate Jam Night", which debuted its Whisky A Go Go residency on March 29, features a wide range of music genres, a circus atmosphere, every Tuesday night at the Whisky A Go Go.

Chuck Wright, longtime bassist of QUIET RIOT, started "Ultimate Jam Night" over a year ago at Lucky Strike and has now moved it to the Whisky A Go Go. It remains a no-cover show.

RIP to Nick Menza. Seeing the "Symphony of Destruction" video was the spark that made me fall in… https://t.co/lni9EAipMk