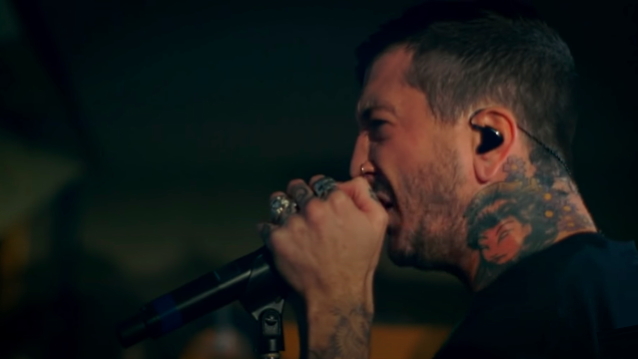 Former OF MICE & MEN frontman Austin Carlile has denied multiple claims of sexual misconduct, which were posted by an alleged victim on social media. The 32-year-old singer has been accused of sexually assaulting several women.

The accuser took to her Facebook to detail the allegations and call out Alternative Press for not reporting over 15 different stories shared with the publication regarding Carlile's behavior. Her account was corroborated by her husband. The magazine responded by saying, "For legal purposes regarding the Austin Carlile accusations, the story couldn't run as it was told," and later posted a lengthier statement explaining its decision to bury the story.

Carlile's former bandmates issued a statement of their own in which they did not mention him by name but said that they "absolutely condemn sexual violence and harassment in any form."

Carlile — who became a born-again Christian in 2016 — released a statement on Wednesday (June 17) admitting that he "acted like a jerk" and did things that he is "not proud of," but insisted he "never violated anyone."

"In my younger years, I absolutely was not the best person, but I have never physically abused, preyed upon, forced myself upon, or drugged any woman. These accusations are false and defamatory.

"I am not a perfect person: I smoked marijuana daily, drank often, got into fights and acted like a jerk more times than I can count. I did things and acted in ways that I am not proud of, but never have I violated anyone. These 'accusations' being thrown around on social media, in our current 'cancel culture' climate, are extremely heinous and completely without merit.

"My wife is a molestation and rape survivor, and I have personally seen the deep, long-standing pain that she battles with every day. I have spent years surrendering my flesh over to God, allowing Him to constantly improve who I am as a man, husband, and father. During this past week, I have even had the joy of seeing the heartbeat of my new child for the very first time. Today, I am focused on supporting my pregnant wife, our daughter, this new blessing in our lives, my health, my wife's health, and striving to be a better person every day.

"These accusations have been investigated by the appropriate authorities as well as independent journalists and were determined to be unfounded. I apologize to the Marfan Foundation, I Am Second, my former bandmates and any of our dedicated fans who have been unjustly brought into this controversy and wish them all nothing but the best.

"All women deserve to feel safe, supported, and heard, but these unjust attacks upon my family and accusations against me, are decades-old claims that are unfounded."

Carlile left OF MICE & MEN in 2016 due to his ongoing battle with Marfan syndrome, a rare genetic disorder that afflicts the connective tissue holding the body's cells, organs and tissue together.

Carlile originally exited OF MICE & MEN in 2010 after his doctor forbade him from touring to undergo heart surgery tied to complications with Marfan Syndrome. He returned in 2011, but his ailments didn't cease, forcing him to depart the band for the second, and presumably final, time nearly four years ago.