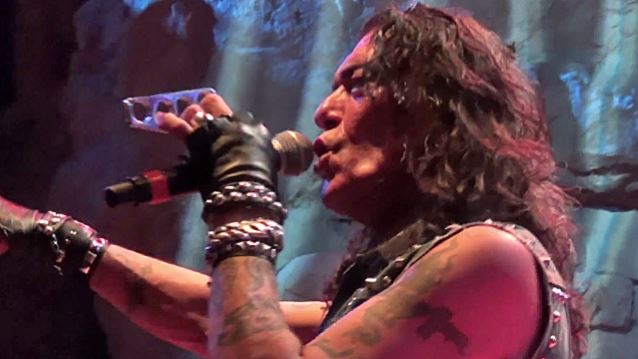 "I Can't Take It", the new video from former RATT singer Stephen Pearcy, can be seen below. The clip was filmed at the legendary Whisky A Go Go in West Hollywood, California.

"I Can't Take It" is one of three singles — alongside "Just One More Time" and "Recipe For Disaster" — that have been released digitally from Pearcy's forthcoming solo album, "Smash", to be made available via Stephen's Top Fuel Records.

Pearcy recently told "Trunk Nation" about his plans for the next CD release: "I wanna record about 20 [songs] — possibly 25 — and release a song every few weeks, when it's done [and] ready, and everybody will get a new single until they get a complete, huge album CD package."

The recording and touring lineup of Pearcy's solo band is as follows:

Asked if he thinks there will ever be a follow-up album to RATT's 2010 CD, "Infestation", Pearcy told the "One On One With Mitch Lafon" podcast: "It's a little too late for that. I doubt [it will happen]. Time has passed. Warren [DeMartini, guitar] and I were actually working on music, and there is a song that we actually recorded. And if it sees the light of day, I would be very proud of it, and he would too. We finished it, and it's done, recorded. And if that's it, that's it. But I don't see any future in RATT and moving on. There's too much unresolved stuff, and it's okay. There's other things going on, and there's no need for that. I'm happy with the legacy. We're all doing different things. As a matter of fact, Juan Croucier, the original bass player of RATT… him and I will be, actually, doing a project later in the year — later in the year after I'm done touring. He's come out and jammed with me many times, but I think we're gonna do a whole another project. It won't interfere with my solo stuff and my band, but we will be working on something real soon."

RATT drummer Bobby Blotzer recently said that he decided to go out on the road and perform the band's hits with the RATT EXPERIENCE after a disagreement over the ownership of the RATT name made it impossible for the original members of the group to work together.