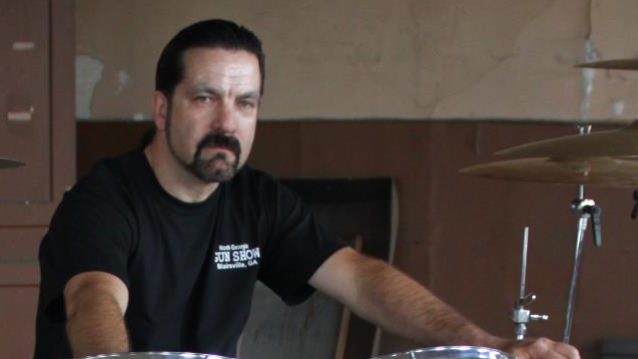 A controversial billboard rented by Cherokee Guns, the North Carolina store owned by former SAVATAGE drummer Steve "Doc" Wacholz, will soon be removed, according to the advertising company that owns the sign.

Cherokee recently came under fire for its billboard mocking the minority female congresswomen known as "The Squad" — Alexandria Ocasio-Cortez (D-N.Y.),Ilhan Oman (D-MN),Rashida Tlaib (D-N.Y.) and Ayanna Pressley (D-MA). The progressive quartet, elected in November of 2018 as part of a so-called "blue wave," are frequent critics of President Donald J. Trump.

On the billboard, which Wacholz says he rented for $250 from Allison Outdoor Advertising, Inc., pictures of the four freshmen representatives are displayed below a headline that reads "The 4 Horsemen Cometh Are Idiots." Below is a tag line that reads "signed, the Deplorables," a reference to a 2016 speech by then-presidential candidate Hillary Clinton in which she said supporters of Trump, her Republican opponent, belong in a "basket of deplorables" due to their "racist, sexist, homophobic, xenophobic, Islamaphobic" views. Trump would go on to become America's 45th President despite losing the popular vote by nearly three million ballots.

Wacholz, 57, told the Asheville (N.C.) Citizen Times newspaper that the billboard was an exercise of his freedom of speech. "I'm not inciting any violence or being racist," Wacholz said. "It's a statement. It's an opinion."

He added that the billboard's primary goal was to criticize a quartet of politicians he believes to be "socialists," adding that he "also feel[s] a couple of them, being Muslim, have ties to actual terrorist groups."

Others, however, object to the congresswomen being publicly criticized by a gun shop in an era when inflammatory rhetoric has been cited as an inspiration behind numerous acts of violence by white supremacists. On Monday (July 29),The Coalition To Stop Gun Violence called the billboard "violent rhetoric."

"Threats against members of Congress, particularly minority members, are trending [upward] and it is driven by the President's racial rhetoric," the group wrote. "This is dangerous!"

Muslim Advocates, a national civil rights organization, denounced the ad for promoting violence against the congresswomen, who Trump recently said should "go back" to their countries of origin despite the fact that all four are American citizens.

Tlaib herself tweeted about the billboard on Wednesday (July 31),asking, "How the hell is this not inciting violence?" Pressley, meanwhile, appealed to her Republican House of Representatives colleague Mark Meadows, whose district includes the city of Murphy, where Cherokee Guns is located. "Racist rhetoric from the occupant of the White House has made hate our new normal. We are still vulnerable," she wrote, before calling on Rep. Meadows "to finally do the right thing."

Wacholz, however, was unmoved, writing on the store's Facebook page that he plans to merchandise the image in question. "Alright my fellow Infields For Trump," he wrote, "due to OVERWHELMING demand, you may come b the shop (next week) and get your very own FOUR HORSEMEN COMETH STICKER." He noting that the only requirements to receive the sticker were to "eat a piece of bacon" and "tell us you're voting for Trump in 2020," adding that "snowflakes and liberals are not eligible."

According to Chattanooga, Tennessee's NewsChannel9, Allison Outdoor Advertising apologized for the sign and said today it would be "coming down" in the near future. "For all those who has [sic] concern over the Cherokee Guns Artwork. The board is coming down," the company wrote. "This Creative never came on managements desk for approval. We understand this is a delicate subject and we greatly apologize for it ever going up."

As of this writing, Cherokee has yet to comment on the sign's impending removal.

Wacholz left SAVATAGE in 1993, soon after the completion of the group's seventh full-length, "Edge Of Thorns". (Although he is pictured and credited on the following year's "Handful Of Rain", he did not actually perform on the album.) Since then, Wacholz — whose nickname "Doc" is an abbreviation of "Doctor Killdrums", a moniker he earned for his hard-hitting style — has recorded with the likes of CRIMSON GLORY, REVERENCE and JON OLIVA'S PAIN.

His primary focus for the past seven years, however, has been Cherokee Guns, which he describes on the store's web site as a "humble lil' gun shop... built by our back pockets, the sweat of our brow and great customer service. No one helped us with ANY type of loans (especially FEDERAL government Obama loans)."

The "4 Horsemen" billboard isn't Cherokee's first advertisement that has raised eyebrows. In 2017, the store leased a sign from Allison that was headlined with the words "Infidel Armament" in block letters above Arabic script and an automatic rifle. Two years prior, another Cherokee billboard read, "Give me your tired, your poor... Keep your Syrian refugees."

#Racist rhetoric from the occupant of the @WhiteHouse has made hate our new normal. We are still vulnerable. @RepMarkMeadows – Cherokee Guns is in your district & you and I serve on a committee together. Here’s your chance to finally do the right thing. https://t.co/IvR1eunFQt

Alright my fellow Infidels for Trump...due to OVERWHELMING demand...you may come by the shop (next week) and get your...