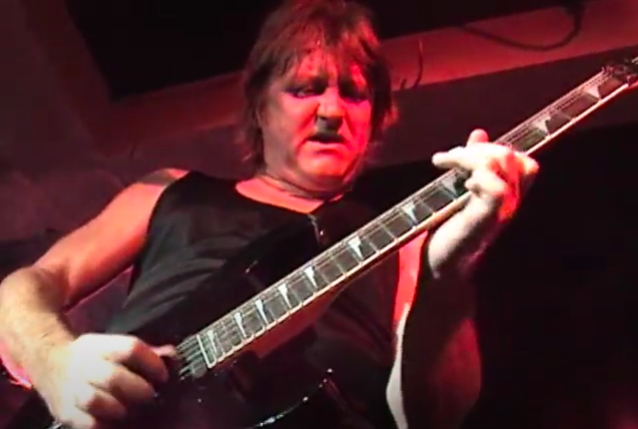 Paul Chapman, the Welsh rock guitarist best known for his work in UFO and WAYSTED, has died at the age of 66. His passing was confirmed by his son, who wrote on Paul's Facebook page: "It is with a heavy heart writing this, today is my dads 66th birthday. He passed away earlier this afternoon. He was a brilliant, energetic, loving and most carefree person and the First man I ever loved. Everyone he came in contact with loved him. no ADORED him. will keep everyone posted on his celebration of life. I appreciate everyone's thoughts and prayers as his family grieves and processes everything at this time. I love you Dad. So much."

In Paul's early career, his first notable band was the Welsh outfit UNIVERSE. Chapman then joined SKID ROW in December 1971 replacing Gary Moore as guitarist. His tenure was fairly short and only lasted until July 1972. His next band was KIMLA TAZ, with whom he was guitarist from December 1972 to May 1974.

Chapman first joined UFO in 1974 as a second guitarist to augment the band's live sound, having answered an advert in U.K.'s music paper Melody Maker. He auditioned at the Unity Theatre in London. Although Chapman did not record an album during this period, he did join in time to tour and promote the "Phenomenon" album. However, he can be heard with the band on several tracks on the BBC live sessions album that was released retrospectively. He left UFO in January 1975 and went on to form LONE STAR, where he remained until June 1978. In 1977, he filled in for Michael Schenker in UFO when they were on tour with RUSH in the United States during one of the German guitarist's absences.

Chapman later hooked up with former UFO bandmate Pete Way in WAYSTED and recorded the albums "The Good The Bad The Waysted" and "Save Your Prayers". He rejoined a reformed WAYSTED in 2003 and completed a new album before resigning from the band in November 2004. Chapman also went on to form a new band PCP (PAUL CHAPMAN PROJECT).

In recent years, Chapman had been teaching music at his studio in Melbourne, Florida.

It is with a heavy heart writing this, today is my dads 66th birthday. He passed away earlier this afternoon. He was a...

We send our deepest sympathy to the family and friends of Paul Tonka Chapman, who died yesterday, on his 66th birthday.
Paul's son broke the tragic news on Paul's Facebook page yesterday evening.
R.I.P. Tonka

R.I.P. Mr. Paul Chapman!!!! Lovely gentleman and great guitar player!!! I had the great fortune of meeting him in Philadelphia, and L.A., and he was nothing short of amazing to a young dreamer!!!! 66 is much too young!!! pic.twitter.com/ne3bV1I0rp

An AWFUL year keeps getting even worse. According to his FB former @UFO_rockband guitarist Paul Chapman has passed away. I LOVED Paul’s playing & his albums w/ UFO, Waysted, Lone Star & more. So bummed! Damn.. on his 66th birthday no less.. RIP Paul. pic.twitter.com/VOFPoUPujX

Just got back from the Studio Tonight,When I just heard My Friend #paulchapman@PaulChapman_ Passed away Today on his Birthday? I'm completely gutted hearing this.He was an Amazing Musician,Guitarist, & Human being! Original Guitarist for #UFO I will miss u brother Paul R.I.P. Mt