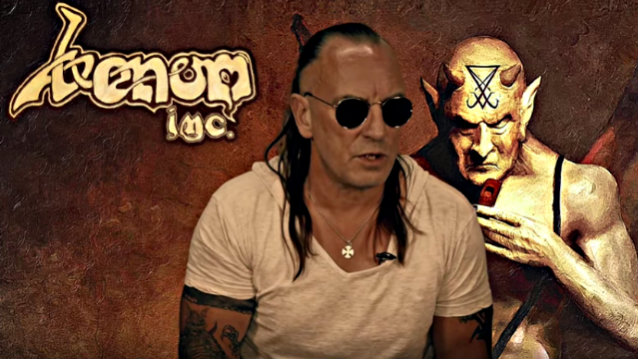 Former VENOM Guitarist MANTAS Has No Contact With CRONOS: 'The Bridges Are Firmly Burnt'

In a brand new interview with Metal Chris of DCHeavyMetal.com, VENOM INC. guitarist and founding member of VENOM, Jeffrey "Mantas" Dunn, was asked if he still keeps in touch with VENOM frontman Conrad "Cronos" Lant. He responded: "There's absolutely no contact with that guy whatsoever. The bridges are firmly burnt. Yes, we did receive a couple of lawyers' letters at the beginning and I responded to both of them and we haven't heard anything since.

"The thing is that I'm the founding member of VENOM. [Original VENOM and current VENOM INC. drummer] Abaddon [Anthony Bray] designed and handdrew the original VENOM logo and Cronos was the last person to join, by invitation, and it was my invitation. And when he went out as VENOM in 2005, I think it was when he started [the new version of] VENOM, it was at that point that Cronos had called me regarding the license of an album and I just didn't care. My head was firmly embroiled in family; everything was about my mother at that point. She had cancer and, essentially, she was dying and she passed away in December of that year. And it was during the course of the conversation he asked me if I was okay with him continuing the VENOM name and at that point I said, 'I don't give a shit. I really don't care what happens with the VENOM name.' I wasn't thinking about bands or anything. However, he did not ask Abaddon, and [Abaddon] said, 'Well, if he had asked me, I would have said no immediately. It just needs to be buried.' So that's why I think it's the fans and the promoters and the industry who are turning around now and saying that we [VENOM INC.] are the real VENOM. We've never once said that, unlike Cronos who's trying to stamp that point. I really don't care about that. He can go out there and do what he wants to do with his two hired guns and we'll go out and do what we do.

"Tony Dolan [former VENOM and current VENOM INC. frontman] said, 'Is it not better that you can go and see this guy [Cronos] and then you can come and see us?' And he just plays big festivals. We go into the smaller venues and we're right in your face," he continued. "So I don't think there's any confusion anymore, let's put it that way. People know who he is and what he does and people know who we are and what we do, and that's fine by me. And that's as far as it goes as far as I'm concerned."

VENOM INC. is not to be confused with the Cronos-fronted version of VENOM, which is continuing to tour and make albums under the VENOM moniker. Joining Cronos in that group are Rage (a.k.a. Stuart Dixon) on guitar and Danté (a.k.a. Danny Needham) on drums.