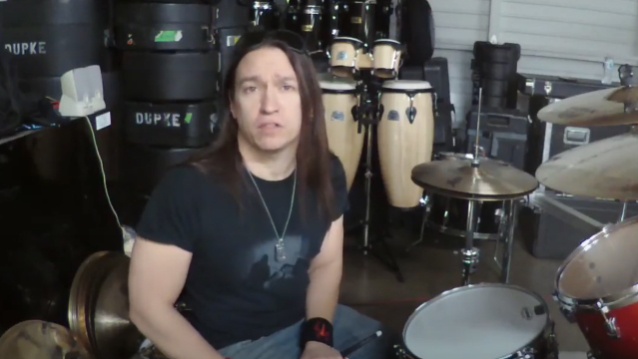 Dupke announced his involvement with the former MURDERDOLLS frontman in a social media post earlier today (Wednesday, July 13). He wrote: "Guess what day it is!! GUESS! WHAT! DAY! IT! IS! That's right, it's WEDNESDAY the 13th!! Which is the perfect day to announce that I will be hitting the road this fall with none other than the Duke of Spook himself, WEDNESDAY 13 on his 20 Years of Fear tour!!! The U.S. run will go from Sept 4th thru Oct 23rd. Then it will be over to Europe in November to support the mighty MINISTRY on their tour! Can't wait to throw down with Wednesday and the boys! GET YOUR GRAVE ON!!!!"

WEDNESDAY 13 will release his as-yet-untitled ninth studio album on October 7 via Napalm Records. A single will precede the full-length effort in August.

Dupke is a Michigan-born drummer who began playing at age 13. After "basically living in the band room" through high school, Dupke enrolled in the Indiana University School of Music, where he began studying with Kenny Aronoff. At only 19 years old, Mike performed with John Mellencamp's band, playing percussion alongside Kenny. He performed on the MTV "Human Wheels" special, the "Arsenio Hall Show", and the "When Jesus Left Birmingham" video. Dupke also played drums for a track on Mellencamp's "Dance Naked" disc.

After college, Mike relocated to Nashville where he met CINDERELLA drummer Fred Coury. It was Coury who ended up pairing Dupke with Los Angeles-based rock band HAIR OF THE DOG. HAIR OF THE DOG got signed to Spitfire Records and recorded two more discs, 2000's "Rise" and 2001's "Ignite". After that group disbanded, Mike began backing slide-blues powerhouse Eric Sardinas, and got his first taste of international touring. In 2006, Dupke joined W.A.S.P., with mainman Blackie Lawless calling Dupke the only drummer he "ever hired on the spot." Mike recorded three discs with the band, 2007's "Dominator", 2009's "Babylon" and 2015's "Golgotha". As a member of W.A.S.P., he performed in nearly 30 countries around the globe.

When not on tour, Mike resides in the Los Angeles area, doing sessions and teaching students.