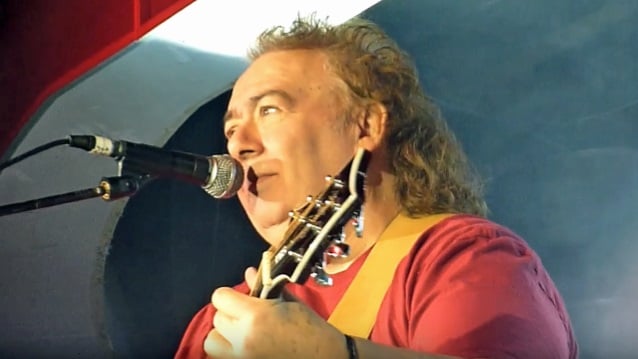 Former WHITESNAKE guitarist Bernie Marsden was recently interviewed by Tigman of the Albany, New York radio station Q103. You can now listen to the chat below. A couple of excerpts follow (transcribed by BLABBERMOUTH.NET).

On his time with WHITESNAKE:

Bernie: "When I look back on it, it was very, very busy — very hectic. I mean, we were touring pretty much all the time, and then we would break specifically to make two records a year, which seems crazy these days, but that's the way it was. And if you look back, it didn't hurt anybody — the creative juices were still flowing, and we managed to write some pretty good material. And it all went very, very well for three or four years. And then we came to an end roundabout '82. David [Coverdale, WHITESNAKE mainman] relocated to America — he lives up in Nevada — and put the band back together in the mid-'80s, but with kind of an American lineup. And that's the band that re-recorded 'Here I Go Again', and the rest of that is kind of history, and [that song] has kind of become an American anthem."

On what he thought about Coverdale re-recording some of the early WHITESNAKE material with later lineups:

Bernie: "It was four or five years between the two things, and there was no bitterness or anything, I was not thinking, 'Oh, man. That should be me.' I don't work like that. I could listen to WHITESNAKE roundabout the '87 period and onwards, and to this day, when I still play with them occasionally. When they come over to Europe, I very often get up on stage and guest with them. But it was a different band. I could listen to WHITESNAKE then as if it was JOURNEY or FOREIGNER or TOTO, you know what I mean? I liked what they were doing. It wasn't the kind of thing we were doing — it was slightly more adult-orientated rock rather than what I was doing, [which was] kind of blues rock. But a good song is a good song, and as long as you have good musicians, it's always gonna sound good."

On whether he thinks WHITESNAKE will ever be inducted into the Rock And Roll Hall Of Fame:

Bernie: "Well, that would be nice. That would be an honor. I think the work we've put in and the work that has been done subsequently is on a par with some of the people that have been inducted. All I know is what happens every year, on a yearly basis, how much WHITESNAKE gets played on the radio, and, obviously, the majority of that is 'Here I Go Again'. It's one of those songs that is in the psyche of people, and that seems to be one of the criteria for being mentioned in those kind of honorable things. But what happens [with regards to the Rock Hall] is up to other people, not me."