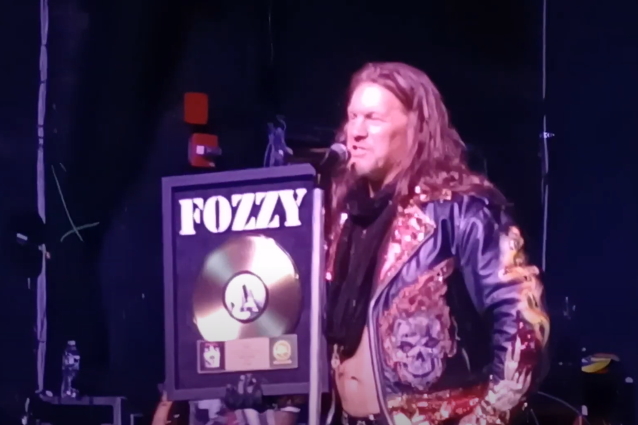 The members of FOZZY were presented with a gold record plaque for their 2017 breakout hit "Judas" during their concert Monday night (April 11) at the Gramercy Theatre in New York City. Fan-filmed video of the presentation is available below.

"Judas", which reached the Top 5 on the U.S. rock chart and boasts 55 million views on YouTube for the music video, was certified gold by the RIAA (Recording Industry Association Of America) for accumulating 500,000 certified units.

Last month, when the news of "Judas" going gold was first announced, FOZZY singer Chris Jericho stated: "Being awarded a gold record has been a dream of mine ever since I started listening to THE BEATLES at nine years old and saw a picture of them getting an award for 'Beatles VI'. Then as I grew older and heard Ozzy [Osbourne] talk about his 'gold discs' and seeing the walls of Rudolf Schenker's house plastered with framed SCORPIONS awards, I set my goals on someday getting one of my own. And for 'Judas' to have sold 500,000 units in this day and age completely blows my mind as a fan and a musician, and also makes me realize how far FOZZY has come and how far we are going to go!! Thanks to all of you for making this dream come true for me and the guys. I can't wait to hang my award on my wall… just like Rudolf."

FOZZY's new album, "Boombox", is due on May 6. The LP, which includes the top 10 singles "Nowhere To Run" and "Sane", was once again produced by Johnny Andrews.