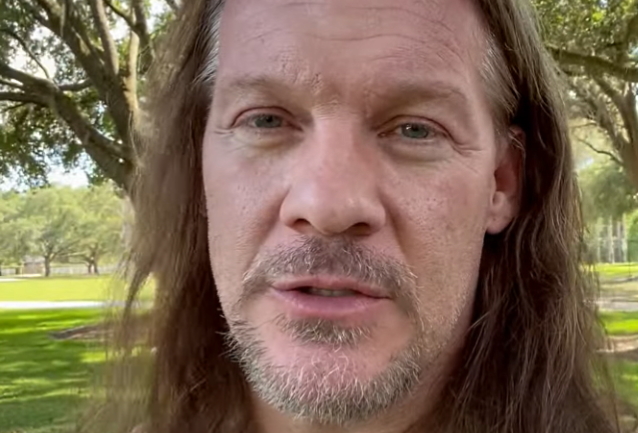 In a new interview with Jave Patterson of Two Doods Reviews, FOZZY frontman Chris Jericho discussed his recent admission that he and his bandmates use "backing tracks for some songs" during their live performances. The conversation took place a month after SiriusXM radio personality Eddie Trunk blasted the rock band SANTA CRUZ for allegedly using pre-recorded tracks during a recent concert, saying it's "unreal" how fans and promoters are seemingly okay with the practice.

While most of Trunk's social media followers were in complete agreement with him on the topic when he first broached it in relation to SANTA CRUZ on April 8, several took the opportunity to criticize him for failing to call out Jericho — whom Eddie has repeatedly referred to as a "close friend" in the past — for confirming that FOZZY utilizes backing tracks and insisting that "everybody" else does as well. Jericho was a guest on the April 4 episode of Trunk's SiriusXM show "Trunk Nation With Eddie Trunk" but was not questioned about the backing-tracks comments that he had made just days earlier.

When asked by Patterson to clarify how much FOZZY relies on backing tracks and whether running backing tracks means being able to do a show or not do a show for a band like FOZZY, Jericho responded (as transcribed by BLABBERMOUTH.NET): "Absolutely not. Absolutely not. I think there's a real misconception… You used the word 'rely' — that's also the wrong word to use as well. And Eddie Trunk actually came to our show at Asbury Park and did a whole show about FOZZY in that we're all playing and singing a thousand percent. What we use tracks for is background noises, keyboards, industrial sounds for [our cover of FRANKIE GOES TO HOLLYWOOD's song] 'Relax' — ambience, that sort of thing. And that's what bands use… That's what we use backing tracks for. Take the tracks away… As a matter of fact, in Aurora, Illinois on this tour, the tracks completely shut down — we did the entire set exactly the way that it was, and it sounded great. It's just you have the ear candy and little extra nuances that makes the show just better. It makes it sound better because you're hearing things that you can't do if you don't have a keyboard player or a string section. 'Army Of One' has a whole symphony on it. What are we gonna do? Pack up 15 guys in a tour bus and take them with us down to wherever the hell we are? Obviously, some bands do use them more. SANTA CRUZ was using 'em — that's the band. We toured with SANTA CRUZ.

"I think in this day and age there's so much of a debate about it where most people really don't care," Chris continued. "It just adds to the show. And most people don't analyze it like that. But for the Eddie Trunk thing, you can go listen to his Sirius show and listen to him when he came to the Asbury Park show [at] the Stone Pony that we had. And he said, 'I came to see the show, and I was analyzing it and they were singing and playing, and it was great. And they're an awesome band.'

"For whatever reason, we got lumped into this whole discussion — because I said we use tracks," Jericho added. "Ask Zach [Myers] from SHINEDOWN if they use tracks. Ask Matt [M. Shadows] from AVENGED SEVENFOLD. It's just how bands work. Unless you're gonna go out there like THE [ROLLING] STONES with 17 people, and we can't do that. It's not plausible. It's not practical. And like I said, this is rock and roll. If I wanna put fucking strings on a song, I'm gonna do it and play it on the track.

"Guess what — when QUEEN was touring in the '70s and they did 'Bohemian Rhapsody', they didn't have five opera singers going, 'Scaramouche, Scaramouche.' They used tracks. Would you say QUEEN is a track band? No. But they used tracks. It's okay. People, it's okay."

Back in July 2020, Jericho was accused by Sebastian Bach of using pre-recorded lead vocal tracks during live performances. The former SKID ROW frontman initially claimed Jericho was "miming to a tape" at FOZZY concerts in a social media post. In response, the wrestler-turned-rocker insisted that he had "never mimed anything ever" and challenged Bach to a "singoff" with "no effects, no tuning, no bullshit", saying "Bas is a great singer...but I'm better".