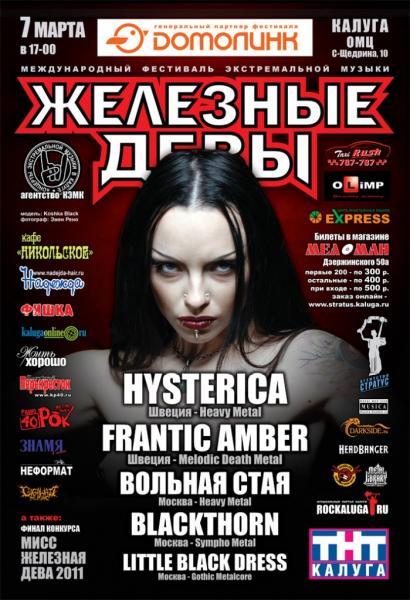 Professionally filmed video footage of the Stockholm, Sweden-based all-female metal band FRANTIC AMBER performing the song "Bloodlust" at the Zheleznye Devy festival in Russia on March 7, 2011 an be viewed below.

Featuring members from four different countries (Sweden, Norway, Denmark and Japan),FRANTIC AMBER delivers straightforward melo-death growl spiced up with clean vocals. The band has in the past year gone from playing at local clubs to performing at larger festivals such as Sweden Rock Festival as well as headlining the aforementioned female-voice festival Zheleznye Devy during a week-long run of dates in Russia.

FRANTIC AMBER was conceived in 2008 by guitarist Mary, who was looking to form an all-female band with the power and attitude more commonly associated with male groups. After going through several personnel changes, FRANTIC AMBER's lineup was solidified in March 2010. A video for the song "Wrath Of Judgement" made quite an impression on the metal scene, paving the way for the worldwide digital release of the band's debut five-song EP via the Australian metal label BlueFreya Media.

FRANTIC AMBER is currently working on material for its second EP which it plans to begin recording in early May. In addition, the band is busy booking gigs and playing out as often as possible while also searching for the right girl to fill the empty drummer seat.