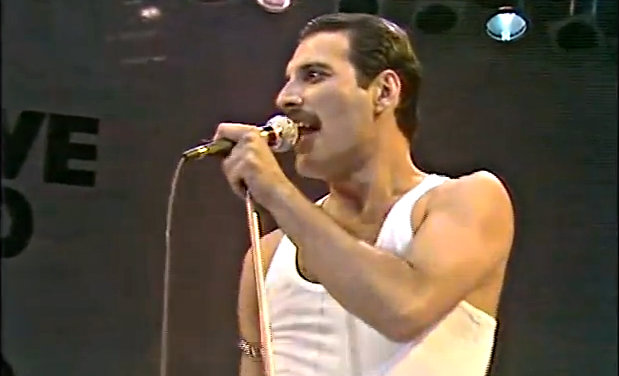 According to The Pulse Of Radio, the still-untitled Freddie Mercury biopic has a new leading man. 33-year-old actor Ben Whishaw — best know for his portrayal as Q in the recent James Bond thriller "Skyfall" and Keith Richards in "Stoned" — has been cast as Mercury. The casting choice follows the departure of "Borat" star Sacha Baron Cohen, who left the project in July. The film will be directed by Dexter Fletcher, whose work includes "Lock, Stock, And Two Smoking Barrels" and the HBO series "Band Of Brothers".

Close friend Elton John was among the few allowed to visit Freddie Mercury during his final days. "He was sick and he was dying. I used to go around and see him — I was one of the few people to be there and I couldn't stay there for very long; I'd stay there for about an hour at a time, because I found it was so painful and traumatizing," he said. "And he was so brave. He was still spending money and buying things at auction right up to the point that he died — which I thought was hilarious, and the kind of thing I probably would do. But at that Christmas, the Christmas shortly after he had died, I got a present delivered to me in a sheet and I collect Henry Scott Tuke paintings and it was a painting by Henry Scott Tuke from Freddie, saying 'Dear Sharon [laughs] — hope you love this, love Molina.' It was. . . I just completely broke down. And to think of me as he was so ill, he wanted to give that to me for Christmas and he died about a month beforehand. And it was quite a choker. That was the kind of person he was."