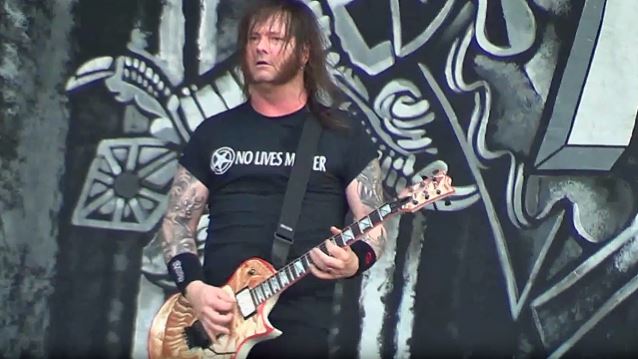 GARY HOLT Is 'Starting To Accumulate Riffs' For Next EXODUS Album

SLAYER and EXODUS guitarist Gary Holt was interviewed on the August 26-28 edition of Full Metal Jackie's nationally syndicated radio show and the August 29 episode of "Whiplash", the weekly program she hosts on KLOS. You can now listen to the chat using the Podbean widget below. A few excerpts follow.

Full Metal Jackie: Talking about being in SLAYER now, what did you never know about SLAYER's band dynamics until you joined?

Gary: I don't know. I don't think there's really anything I didn't know. We've known each other for so long, it was kind of just like showing up to jam with guys I've known since I was a kid. So there wasn't anything, really, to learn — it was just seeing old faces and doing something different, but with people I've known since the whole infancy of thrash metal. So it was an easy adjustment to make.

Full Metal Jackie: Gary, fans enshrine stories and events from the early days of Bay Area metal. What means more to you now — lasting friendship with people from that time or the lasting effect of what you all created?

Gary: To me, friendships mean more than anything. I'm honored that anyone cared about the music we made all these years later. That's a bonus. But I look back on the old days differently now than I would have in, say, the 1990s or something. Now there's a lot more nostalgia to it and just fond memories of a simpler time when we played music without the need for such detailed things, as far as the business side of things. We were just kids playing in a garage making heavy metal.

Full Metal Jackie: Obviously, playing in two touring bands increases your time spent working. What's life like when you have downtime from both SLAYER and EXODUS?

Gary: When I have downtime, I just wanna spend my time home with my wife and kids. Family means everything to me, especially, you know… It's another thing — an added bonus of age: your priorities are more in line. But, you know, it's, like, I can't tour constantly — not twelve months out of the year. People close to me would kill me. And fortunately for EXODUS, they've been super understanding and we also have a super-amazing, awesome stunt double in Kragen Lum who fills in for me when I can't be there [with EXODUS]. He's an amazing guitar player, he's part of the family, and he nails all the parts as well as I ever could hope to play them. [Laughs] It's worked out and the fans have been really accepting of it, and I hope to find some time to get back out there on the road with EXODUS soon.

Full Metal Jackie: Can you tell us anything about a timeline or status or anything that's going on with EXODUS right now?

Gary: They've got some summer festival stuff booked. And then in early September, I actually have my first EXODUS shows in quite some time. We're doing three shows with KILLSWITCH ENGAGE [including] my first San Francisco show back with [singer] Zetro [Steve Souza] back in the band. We played Oakland [before], but it's the first time in San Francisco. So I'm looking forward to that. It's gonna be fun.

Full Metal Jackie: There's this huge fall tour with SLAYER. What can you tell us about your timeline with both bands and how it's looking for the rest of the year for you?

Gary: I'm pretty locked up for quite a while with SLAYER. We just did seven and a half weeks in Europe, got home, one day later flew down to San Diego to do Comic-Con, [then went] home for thirteen days and back to Europe. But the fall U.S. tour is gonna be awesome, 'cause it's the first time in several years — the first time ever with my time in SLAYER — that I'm touring with my homeboys in DEATH ANGEL, some of my closest friends on earth. And, you know, of course, we've done lots of stuff with our buddies in ANTHRAX. So put it all together and it's gonna be a fun tour.

Full Metal Jackie: Again, could you tell us what we're looking like for a new EXODUS record?

Gary: I'm starting to accumulate riffs. Like any creative process, especially for me, it can come in a flood after a period of nothing. I'm starting to get a real creative pull to start compiling more and more riffs and stuff and start putting it together. I'm finding myself staring out at the wall thinking about lyrics. Usually if you see me looking at the stucco, it means I'm kind of hitting a creative place. [Laughs] So, you know, hopefully next year we'll get in the studio.