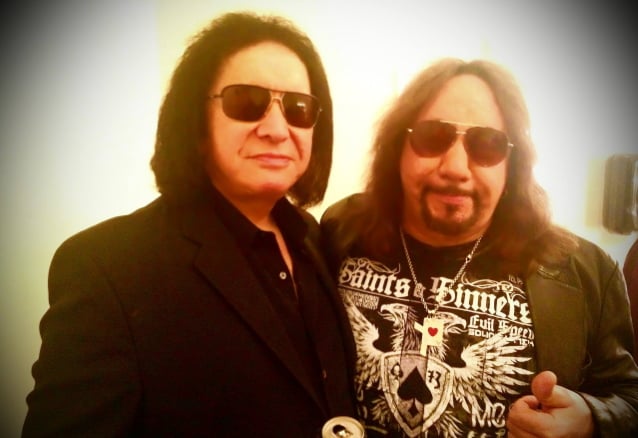 In the months after KISS announced "End Of The Road", fans wondered openly if original members Frehley (guitar) and Criss (drums) would be involved in the tour, especially considering the apparent recent goodwill between Simmons and Paul Stanley and Ace. Frehley's latest all-original album "Spaceman" — a title suggested by Simmons himself — features two songs the pair wrote together, and the duo completed a joint summer 2018 tour of Australia, after which Frehley fired his solo backing band and hired Simmons's.

In a new interview with Finland's Chaoszine, Simmons was asked if Frehley and Peter will have any involvement in KISS's final concert. He responded (as transcribed by BLABBERMOUTH.NET): "We've tried. I keep trying. Paul and I met with Ace, trying to convince him to come back. He said, 'I want this. I want that.' Well, we can't do that. I asked Ace and Peter to be in the documentary ['Biography: KISStory', which premiered on A&E in June 2021]. They said no. They might do it if they have complete control of the edit. I said, 'We can't do that, because even we don't have that. But I won't control what you say; you can say whatever you want.' The answer is no — both of them. I asked Ace and Peter, 'Come out on tour. We'll get you your own room and everything. Come out on the encores.' Ace said, 'No. The only way I'll come out is if I'm the Spaceman and you ask Tommy [Thayer, KISS's current guitarist] to leave.' I go, 'Well, that's not gonna happen.' First of all, I care about Ace, but he's not in shape — he can't play that way and doesn't have the physical stamina to do that…

"Look, we care about them," Gene added. "We started this thing together and they were equally important to the beginning of the band with Paul and I — no question. But as time went on… Not everybody is designed to run a marathon. Some people are designed to be in a band for a year or two, or a few years, and then that's all they can do. And both of them have been in the band three different times. How many chances in life do you get? All I know is when I put my hand in fire the first time, I got burnt; I didn't get a second or third chance.

"So, the answer is the door's always open," Simmons said. "If they wanna jump on stage at any time and do the encores with us, terrific. But no, we're not gonna get rid of Tommy or Eric [Singer, current KISS drummer]. In fact, Tommy and Eric are the best things that happened to us. They gave us new life [and] new appreciation for what we do because they were fans first. And every once in a while, Eric or Tommy will turn around and say, 'Wow! Isn't this great?' And it makes us realize, 'Yeah! Wow! Isn't this great?'"

Gene was also asked if he saw any of the video footage from last month's Creatures Fest in Nashville where Criss, Frehley and fellow former KISS members Vinnie Vincent and Bruce Kulick all performed. He responded: "Somebody showed me about 30 seconds, yeah. It was very sad. I felt sad for Peter… When I called to invite Peter to be in the documentary, his health isn't what it should be. I don't wanna get too specific because it's part of his private life. But no, physically, he wouldn't be able to do it. Neither would Ace."

In 2018, Frehley told VintageRock.com that "the only way" he would "seriously consider" taking part in "End Of The Road" is "if I took back my make-up and costume and my character — which I designed." He added that Thayer "is not a bad guitar player, but he basically just mimics everything I wrote, and tries to imitate my persona. He's been doing it for 15 years," he said. "But the reality is I'm the original guy. And nobody can really copy the way I play guitar."

Asked if he would still consider participating in the tour if Criss was not involved, Ace said: "I think it would be great if Peter was involved. Obviously, at this point in his life, he wouldn't be able to do a two-hour show. But I can see if we worked out a situation where Peter came out at the end and did three or four songs — sang 'Beth', did 'Black Diamond' and a couple of others, I think that would be fun."

Prior to the "End Of The Road" launch, Stanley and Simmons weren't very enthusiastic about the prospect of an onstage collaboration with Vinnie Vincent. "Now Vinnie, that's one exception, and for so many reasons," Stanley told Guitar World. "I would say that's not someone who I want to celebrate."

Simmons also chimed in, explaining that "it's worth stating that Vinnie has sued the band and lost 14 times. I'm not here to cast any aspersions. He's a talented guy. That's why he was in the band. But would I depend on him to get up onstage and do anything? Never. … Can he come to the shows? Of course! Anybody can. But onstage? Never."