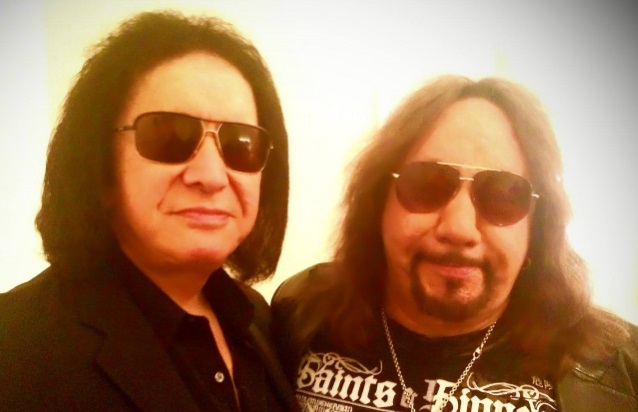 Gene Simmons began personally delivering copies of his new box set, "Gene Simmons - The Vault Experience: 1966-2016", during an appearance on Saturday (January 6) at the Capitol Records building in Los Angeles, California. In addition to spending one-on-one time with purchasers, he was joined by his former bandmate, original KISS guitarist Ace Frehley, for a discussion and some impromptu acoustic-guitar noodling.

Video footage of the event — courtesy of Sonny Pooni of the Podcast Rock City and Growin' Up Rock podcast — can be seen below.

Simmons and Frehley performed together onstage for the first time in over 16 years last September at The Children Matter benefit concert to support the victims of Hurricane Harvey. They also collaborated on two songs for the former KISS guitarist's next solo album.

Describing "The Vault" as "literally and physically the largest box set of all time," Simmons told the "Hair Jordan" show that it stands "three feet tall" and "weighs 38 pounds. You need two arms to wrap around it and two arms to pick it up. It has metal hardware, metal wheels. I'm really proud of it."

Simmons added the price is only $2000, and "there are only gonna be a few thousand made on Earth. After that, they will be gone and they will never be done again. It's not available in stores — no nothing. And I'm gonna be going around the world and hand-delivering it to the fans who buy it."

According to Gene, he will "take a year off and literally travel around the world and hand-deliver the box set to whoever gets it. And the reason for that is… I'm really doing this for myself. Imagine you dreamed as a young kid you'd be a broadcaster and you finally get there and the people that allowed you to get there are the fans, right? The people who listen to you every day. So, because you're so enormously rich and powerful, what you wanna do is you wanna put on the biggest party of all time, but if you're the only person there, it's not much of a party. So my experience is, I'm on stage, but there's a separation between the stage and the fans; there are security guards and I can't get close to them. And when you go through a hotel lobby or some place, there's always a security guard who's keeping the folks away. So what I'm gonna do is I'm gonna change all that and I'm gonna go myself, pay for my own flights, hotels, security, insurance — I'll do that — and I'm gonna be going around the world, yeah, even to New Zealand, and hand-delivering the box sets."

"Gene Simmons - The Vault Experience: 1966-2016" spans the rocker's entire musical career, from 1966 to 2016, and includes the first song he ever wrote at the tender age of 14. There are tracks co-written with Bob Dylan, songs with Eddie and Alex Van Halen from VAN HALEN (a band he says he "discovered"),Joe Perry, and a slew of other luminaries.

Rumors about Frehley's return to KISS gained strength in 2016 after he teamed up with KISS lead singer Paul Stanley on a cover of FREE's "Fire And Water", marking their first collaboration since 1998's "Psycho Circus".

Stanley told Billboard last year that he had no interest in a reunion of KISS's original lineup.