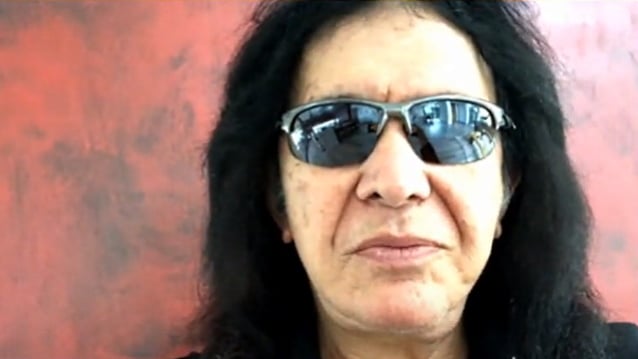 In a new interview with "Talking Wax With Adika Live!", Gene Simmons touched upon the lack of involvement of Peter Criss and Ace Frehley in KISS's new documentary "Biography: KISStory", which premiered late last month with a two-night event on A&E.

"God love 'em, both Ace and Peter, in the beginning of the band, were just the best thing that ever happened to us," Gene said (as transcribed by BLABBERMOUTH.NET). "But they made such horrible choices in their life. And they continue to do that — they continue to make really bad choices, not just in terms of their health and what you ingest, but career choices. Like, we just had this documentary that came out that's a headlining thing at the Tribeca Film Festival, and, of course, without even thinking twice about it, we reached out to both Ace and Peter, 'Hey, come and be part of this thing. You helped create the band. No question about it.' And they refused. Ace wanted certain… 'I want this. I want that. I want editing rights,' and that kind of stuff. And God love him, that wasn't gonna happen. I didn't get those rights and didn't want them; I just wanted to throw caution to the wind and get the thing done. So they barely appear in it."

Last month, KISS frontman Paul Stanley addressed the fact that Frehley and Criss did not get involved in the making of the documentary.

"Some people might take exception to it… Some KISS fan might say, 'Well, how come there isn't more of Ace and Peter?'" Paul told told SiriusXM's Ozzy's Boneyard. "Truly, those guys didn't want to be a part of it without certain… I think there was talk of final approval of footage and editing, and that's fantasy — that's fantasy. It's really a story of the band.

Directed by D.J. Viola, "Biography: KISStory" chronicles the band's five decades in the business as founders Stanley and Simmons reflect on their career. Current members Tommy Thayer and Eric Singer as well as guests Dave Grohl (NIRVANA, FOO FIGHTERS),Tom Morello (RAGE AGAINST THE MACHINE),manager Doc McGhee, music producer Bob Ezrin (ALICE COOPER, PINK FLOYD) and more tell the wild story of the one of the most successful and influential bands in the world.

To promote the documentary, KISS took the stage on June 11 for a special performance at the 2021 Tribeca Film Festival in New York City. For the first time ever, the band played at the festival directly following the screening of part one of "Biography: KISStory". The two-part documentary event was part of the festival's 2021 TV lineup.