Gene Simmons has shot down reports that KISS was invited to perform at Donald Trump's inauguration.

TMZ's cameras caught up with Simmons, his wife and their daughter Sophie outside of Catch in West Hollywood on December 21. When asked if Simmons would play the inauguration, his wife and daughter spoke on his behalf. "No!" they repeatedly shouted.

"As far as I know, nobody ever called me," he said. "I know Donald Trump, I know our president-elect well enough, I suppose, but I never got a call."

Asked if he would perform at the event if he was asked, Simmons — who called Trump the "truest political animal I've ever seen on stage" earlier this year — responded: "The problem with even talking about this is everything has become so polarized. People should just give it a rest and stop trying to use politics or what our president-elect means or doesn't mean as some kind of tool."

He continued: "Look, a wake-up call is that al-Qaeda, al-Aqsa Martyrs' Brigades and all the other bad guys in the world actually don't make a difference between Republicans and Democrats or anybody; they just don't like Americans. So maybe we should all sign up for the American political party and get used to it. We have a president-elect. Now let's move on."

Pressed on what he expects from Donald Trump as president, Simmons said: "Look, he's a good family man. Let's not talk politics. Let's talk the real important issue. He's a good father, there's no drugs, there's no booze, there's no craziness going on. And the rest of it… Do what the founding fathers of this country actually, sort of, created. There's a ballot box, you vote your conscience, you draw the curtain, and that's the end of it. And it's nobody's business who you vote for. And we should all just take a deep breath and get on with our lives, where we should be blessing this hallowed ground called America every day. It's gonna great, it's gonna be fine. Warren Buffett's gonna invest in America, and so will I."

Simmons, a former contestant on Trump's "The Celebrity Apprentice" show, also once again repeated his belief that celebrities should keep their political opinions to themselves — especially when it comes to the results of the 2016 presidential election.

"Why does anybody give a squat what a guy in a band thinks about or anything like that? The last thing I wanna do is to ask President Obama what he thinks about LED ZEPPELIN."

Simmons told People magazine earlier in the year that he liked how Trump was shaking up the presidential race.

"The important thing about Trump, and I'm not saying whether I'm voting for him, or Hilary [Clinton], or anybody else, is that he has changed the game," Simmons said. "He doesn't want your money. This guy funds his own campaign, and he is going to say things that tens of millions of people actually say quietly because politically it's 'incorrect.'" 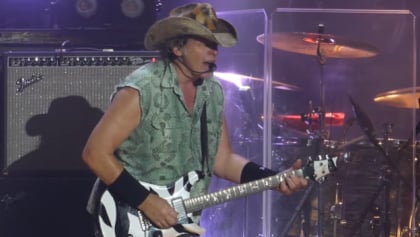