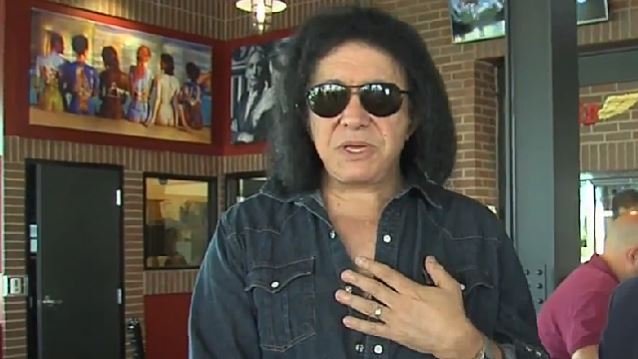 KISS bassist/vocalist Gene Simmons stands by his recent comment that "rock is dead" and says that declining record sales have made it impossible for newer rock bands to develop into iconic artists.

During a September 28 appearance at Rock & Brews in Kansas City, Simmons was asked by Joel Nichols of KSHB's lifestyle show "Kansas City Live" to elaborate on his comments. Simmons said (see video below): "Rock and roll is dead. I'm gonna ask you a question, and you decide, okay? From 1958 until 1988, it's 30 years, name hundreds and hundreds of classic rock acts. Okay, I've got Elvis Presley, THE BEATLES, THE ROLLING STONES, Jimi Hendrix, LED ZEPPELIN… on and on and on. Even Motown… Madonna, Prince, Michael Jackson. From 1988 until today, just give me five. You can't name [them]. Iconic [newer artists]? No. Nobody. How about that?"

When Nichols assumed that Simmons was implying "the economics of it all" was responsible for the death of rock, Gene corrected him. "No, I don't think it's the economics," the rocker said. "I think it really comes down to when technology outpaces the laws of the land, it's the Wild West; people just go and grab territory and don't pay for it. It devalues new bands. It doesn't affect me — I make a living — but it's sad, because the next BEATLES or the next KISS, it does not have a chance."

Simmons also acknowledged that some of his views tend to be controversial and defended his right to speak his mind. He said: "It's called America. You're allowed to say stupid things. You're allowed to voice your opinion. And I'm not better or worse than anybody else."