GEOFF TATE Is 'Very Excited To Be Presenting' QUEENSRŸCHE's 'Operation: Mindcrime' In Full Again After So Long

Former QUEENSRŸCHE singer Geoff Tate was recently interviewed by Meltdown of Detroit's WRIF radio station. You can now listen to the chat using the audio player below.

Speaking about QUEENSRŸCHE's breakthrough album, 1990's "Empire", Tate said: "Yeah, it was a very well-received record. It came out really at the right time. It was 1990, and the record industry was really running on all eight cylinders, and rock music was still popular. Yeah, we just had a good record and it got a lot of radio airplay at the time. And it had a record-company budget of six million dollars for promotion. [Laughs] By today's standards, that's just unheard of; it's impossible. I think the production budgets on most records now are, like, around five hundred dollars."

Tate also talked about his upcoming tour celebrating of the 30th anniversary of his former band's "Operation: Mindcrime" album. He said: "My first show is the 11th of January, which is not too far away, actually, in Dublin, Ireland. I'm gonna be in Europe till April, and then coming to the States in the late spring to start touring over here. So [I'm] looking forward to that, and I'm very excited to be presenting that record again after so long. It's hard to believe it's been 30 years, huh?"

Tate recently recorded a brand new song in support of charity. All proceeds from the track, which is titled "The Way The Wind Blows", will benefit MercyWatch, a nonprofit focused on outreach to the homeless community in Snohomish County, located in the U.S. state of Washington, where Tate lives with his family.

The release of Tate's new song will come just weeks after the arrival of "A New Reality", the third and final of a concept album trilogy from his OPERATION: MINDCRIME project. 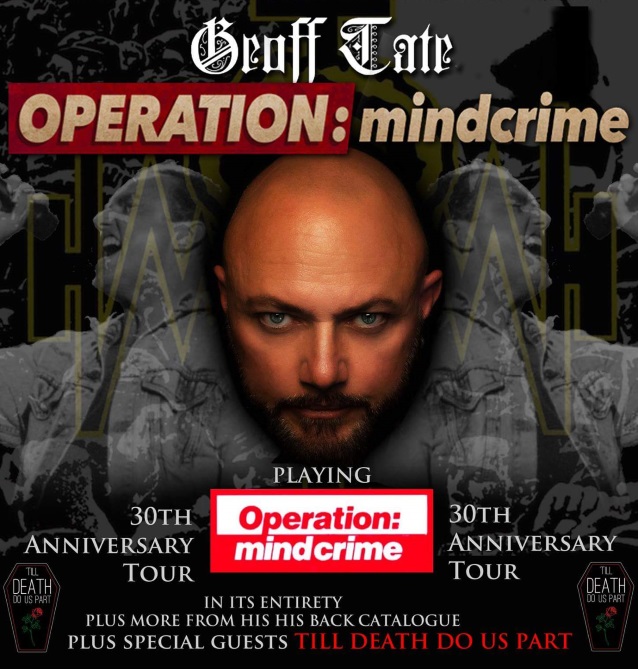