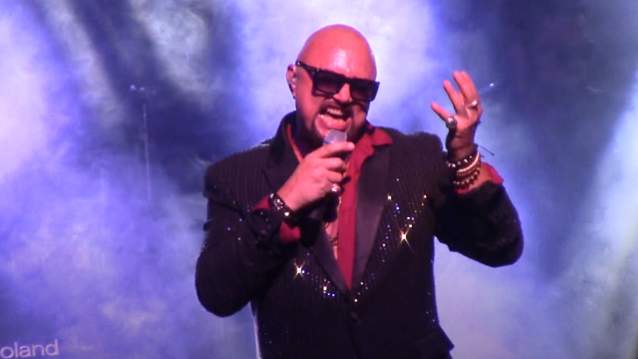 Geoff Tate, who has spent much of the last couple of years on the road celebrating the 30th anniversary of QUEENSRŸCHE's "Empire" and "Rage For Order" albums, has confirmed to "The Jasta Show" that his backing band is playing the music tuned a half step down to accommodate his aging voice.

"I can't hit those high notes like that anymore in standard tuning. Jesus Christ. I mean, not doing a show," he laughed (as transcribed by BLABBERMOUTH.NET). "I could do it on its own if I was just gonna sing the song, but doing it night after night, no. You'll kill yourself. I could barely do it when I recorded it. [Laughs]"

According to Tate, tuning down a half step "doesn't make a big difference at all" when it comes to the way the music is represented and the fans' enjoyment of the live shows. "It's mostly to save the singer's voice," the former QUEENSRŸCHE vocalist explained. "And also, my backup singers, they have to hit all those notes too. And we're doing it night after night after night. It's hard on you as a singer to do that. So you find ways of… Tuning down a half step makes a huge difference 'cause you're not just killing yourself to hit the note, and you can do it consistently seven days a week. But if you are tuned up to standard tuning, I think you'd probably only get three shows before you'd have to take a break. And economically, that's just really, really hard to do, to make it work. So we tour just about seven days a week, if we can help it. It depends on the travel."

Back in 2014, Tate's replacement in QUEENSRŸCHE, Todd La Torre, said that the fact that he sings the band's songs in their original key is one of the reasons he has been able to win over so many of the QUEENSRŸCHE fans following Geoff's departure.

"We don't drop-tune," he said. "When I first got in the band, [the other guys in QUEENSRŸCHE] said, 'Hey, if you want us to tune down a half a step, if it's easier for you, don't be afraid to ask us.' And I said, 'No. I wanna do this the best way that I can to represent the songs the way that they really go, and if it's a struggle for me, I just have more work to do for me. But let me keep trying to do this.' So I think the fact that those old songs weren't being played [in the last few years with Geoff in the band]… I mean, some of them were played, but a lot of times they were tuned down or songs were not played in their entirety, like 'Roads To Madness'; we play that song in its entirety. We play 'NM 156' in its entirety. And those fans, they really love hearing that. So the fact that that wasn't happening, and then when I came into the band, it started happening, it really kind of made it easier, I think, for fans to kind of rally around and go, 'Awesome!'"

Earlier this month, STRYPER frontman Michael Sweet admitted that he and his bandmates no longer attempt to perform their songs in the original key.

"We finally dropped down a half step (D) and I have found that it's not only much easier to hit the 'high' notes but it's just much easier to sing these songs," he said. "We did an 18-show run and I made it through without any vocal issues. I was able to retain my range and high end and sing much more consistently night after night."

Three years ago, IRON MAIDEN's Bruce Dickinson said that he takes pride in the fact that he and his bandmates perform their songs in the original key. "We don't detune, like some other people do," he said. "We don't do any of that. I suppose if one day we have to, we have to, but we don't have to do it now, and I think the songs sound better as a result of it. They're meant to be played in that key."

SCORPIONS singer Klaus Meine told the Phoenix New Times in a 2017 interview that the aging process has forced him and his bandmates to scale down their touring activities — they no longer play three shows in a row or even attempt to perform some of the earlier songs in the original key. He said: "When you listen to songs from 'Blackout', like 'No One Like You', [or] 'Big City Nights', it's physically impossible [now] to do those songs in the original keys. You want to play those songs, but you want to survive 100 shows a year. So some of the songs we play in different keys, but the energy is still there. You're still at the top of your voice. Even now, you've got to go to the edge, but maybe the edge has moved a little bit."