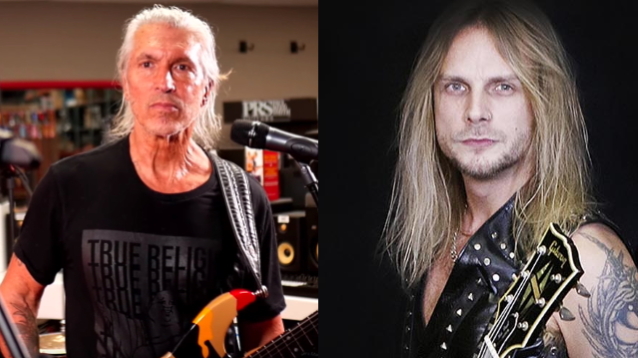 GEORGE LYNCH On JUDAS PRIEST's RICHIE FAULKNER: 'We Are Very Fortunate To Have Him In My Daughter's Life'

Asked in a new interview with Myglobalmind if he and Richie ever jam together, and whether we can expect a collaborative album from the two of them in the future, George said: "I don't know. Maybe. I'll have to go out there and spend more time messing around, like guitar players do when they get together.

"Richie is an awesome player. We are very fortunate to have him in my daughter's life.

"My wife and I went out there [to Nashville] when the baby [was born] and stayed there for a little while," he continued.

"I felt bad posting [about the baby's arrival on social media], because I didn't want it to be about that. I wanted to focus on my daughter, the baby and my family. I didn't want to be running off into the studio every five minutes shredding instead of changing diapers. [Laughs]

"My daughter was raised in a guitar world, and we had her on the road since she was very young. We homeschooled and tutored her. She traveled the world with us and would sit on the side of the stage for shows."

Earlier this year, Lynch expressed his desire to play in PRIEST alongside Faulkner. Speaking at a Pitbull Audio guitar clinic in San Diego in January, Lynch said: "I still to this day love PRIEST. I wish they would call me up and hire me. Glenn Tipton, hello?"

For the past two and a half years, PRIEST has been touring with producer Andy Sneap in place of longtime guitarist Tipton, who retired from full-time activities with the band following a diagnosis of Parkinson's disease.