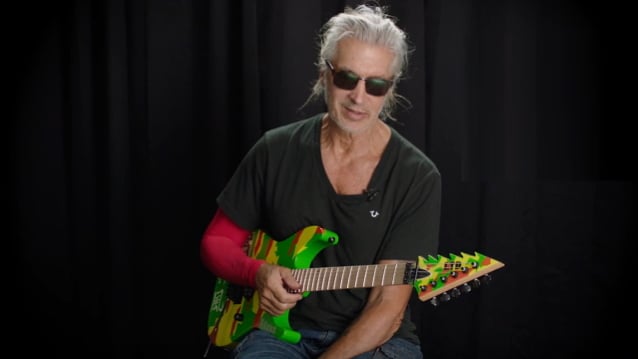 Legendary guitarist George Lynch has confirmed to Chris Annunziata of "The Metal Teddy Bear Experience" show on 90.3 WMSC that he has a new solo instrumental album coming out later this year. "It's done," he said (hear audio below). "It's been done for a while. It's called 'Seamless'. It's [gonna be released] on Rat Pak Records. I just spoke to the head of the label yesterday, actually, and they're gonna try to work it into a release maybe in midyear, maybe the latter part of the summer, back end of the summer — maybe September."

Lynch previously discussed the prospect of releasing a new instrumental album during a 2019 appearance on "Talking Shred". Asked if he would ever record a "shred" instrumental LP, he stated at the time: "Absolutely. I have some trepidation about it because of the insane players who are making it hard for old guys like me to keep up. I look at all those Instagram guys and my mind is just blown every day. It's so beautiful, because a lot of it is — they're not doing what they did in the late '80s, early '90s, just going hyper-speed shred. They do that too, but they're going back to bebop and jazz and Wes Montgomery stuff, Joe Pass stuff... On top of that, the Tosin Abasi [thing], multi-string, multi-tapping, two-handed, all that stuff too, and putting it all together and coming up with hybrid new stuff, which is fascinating. I've been trying to do the finger thing — I can't really do it. I do a fake finger thing. That's just me trying to be Jeff Beck because I think we all just want to be Jeff Beck."