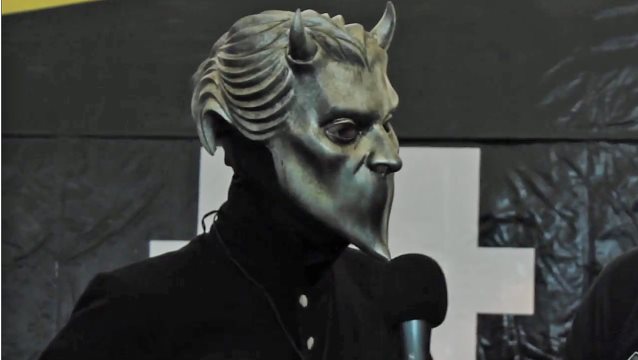 Tristeturno conducted an interview with one of the Nameless Ghouls from Swedish rockers GHOST when the band performed at the Hell & Heaven Festival in Mexico City this past July. You can now watch the chat below.

Asked for his opinion on the current state of the metal scene, the Nameless Ghoul said: "Personally, I'm not a superfan of the current… at least the main metal atmosphere that has been dominant during the last fifteen years — the whole nu metal, deathcore thing is not my thing at all. But it's fine; you don't have to like everything."

He continued: "Unfortunately, one sad thing that is going on right now, obviously, is we're in a time of transition where a lot of older bands are slowly either falling off the face of the earth — literally, unfortunately — and/or breaking up or doing their last tours. So it's definitely a regiment shift in a way, where I don't really think we know right now what is gonna happen. I'm sure it will prevail, I'm sure it will sort itself out. But most of the time, for myself, if I see bands at a festival like this, it's usually old bands that I really like. And usually it's because I know that I'm not gonna see them again, which is sad."

The Nameless Ghoul also talked about how the GHOST sound and image was created. He said: "In many ways, I think that a lot of the things that we do and keep on doing and have on our agenda to do is actually very much based on myself and many of the others in the band growing up listening to a lot of rock music. It's pretty much created from a fan perspective — everything from the actual music and the imagery. I spent my whole childhood listening to records and watching films with THE ROLLING STONES and KISS and THE DOORS… Yeah, this was the '80s, so there wasn't really that much to look at at that point, but I was definitely… I'm super-influenced… I grew up listening to a lot of over-the-top rock and roll with a lot of theatrics and a lot of image. My heroes, when I was, like, three or four years old — this was 1984 — the bands of that year, especially if you were small child in Sweden, it was TWISTED SISTER, it was MÖTLEY CRÜE, it was W.A.S.P. And KISS was the first band that I [got into]. Not to sound derogatory in any way, obviously, we might not be super musically influenced by those bands necessarily nowadays, but still the primordial expression is still… I find myself laughing sometimes, because it's not very far from the things I liked when I was four years old. So that's why I'm saying that it's very much written and very much created from a fan perspective, and I think that that might be one of the reasons why we do have a lot of kids at our shows."

GHOST's latest EP, "Popestar", was released on September 16 by Loma Vista Recordings and is available online and in record stores on CD, vinyl, and digital. The surprise five-track offering features leading psalm "Square Hammer" and also contains covers of selections by ECHO & THE BUNNYMEN, SIMIAN MOBILE DISCO, EURYTHMICS and IMPERIET. "Popestar" was recorded by Papa Emeritus III and his Nameless Ghouls in Linköping, Sweden and produced by Tom Dalgety (PIXIES, ROYAL BLOOD, OPETH).