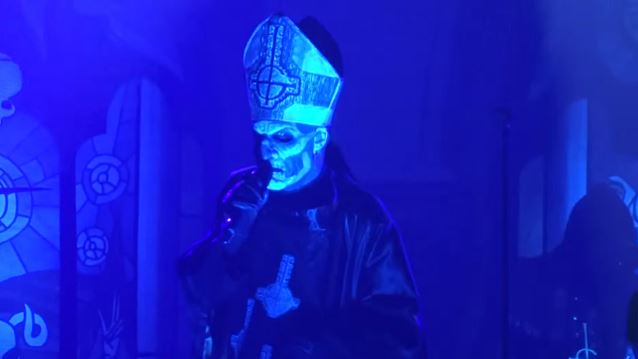 GHOST Will 'Step Down' Before Becoming Musically Irrelevant

On August 23, A Nameless Ghoul from Swedish occult metallers GHOST was interviewed at Teatro Estudio Cavaret in Guadalajara, Mexico. You can now watch the chat below.

Asked where he hoped to see GHOST in five years, the Nameless Ghoul said: "I hope that we will be relevant in five years.

"It is always very hard to foresee, because I like to think, as I've been saying before in interviews, that we are rational enough to feel when the curtain is falling, that we have nothing more to offer — what we're doing is just a repeat.

"Unfortunately, there are a lot of bands, and have always been, around that just keep existing, and I don't blame people, especially when you are a band that… as unflattering and unsexy as it is to talk about, obviously from a money factor, there are a lot of bands out there that have existed for 10, 13, 15, 2, 30 years that just keep doing what they do because they have to — for monetary reasons; they have to live. If you've been in a semi-successful band, you don't wanna start working at a gas station. But in the long run, what happens is that you have a very dense field where everybody has to coexist. Every band that tours notices this: you come into a city, and just that week, there's five concerts. And that's bad for everybody. So I like to think that if we find ourselves not being relevant anymore, or if we start just swimming in place, I hope that we can step down and just not do it [anymore]."

He continued: "But, to answer your question, I hope, considering where our plans are and all the steps we wanna take to becoming bigger or better, is at least two records [from] now that we have a firm idea that will definitely be an upgrade or something different from what we just did. And in this day and age, it's also important, just because of the time factor, we are still contemporary and somewhat new, but I think it's very important not to become too much of a legacy band. And especially something that is so gimmicked as we are, that you have to somehow find that gray zone, that magical way of recreating yourself every now and then, but still keeping the essential flavors of the dish, but still come up with new things to put on the menu. And for now, I think that that is one of my absolute most…. That is my drive factor, that is what keeps me very motivated — 'cause I know that we have so many more things that we have on the list that we need to do in order to regard this as complete. I mean, even now, I think that we are doing just a third of all the things that we set up five years ago. The show that we had in mind when we started was [huge], and still, we are just doing [a relatively small version of it]. Because of natural reasons. We cannot headline any festival, so until we get there, we have to [do what we can]."

One of GHOST's Nameless Ghouls recently dismissed the split petition created by haters of the group, saying he and his bandmates "could not care less" about it.

Over 1,300 people added their name to an online campaign launched in July, which referred the GHOST as a "watered-down BLUE ÖYSTER CULT" and attempted to "convince" the band and its management to call it quits. That resulted in the creation of a counter-petition, which secured over 1,400 signatures. 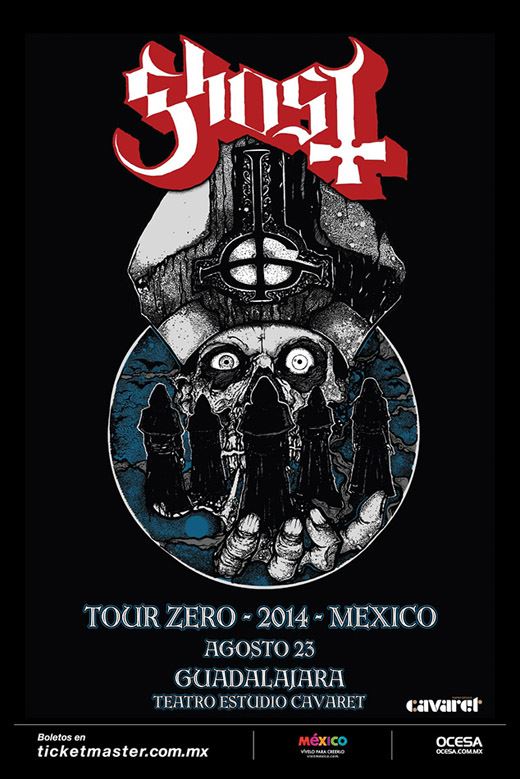